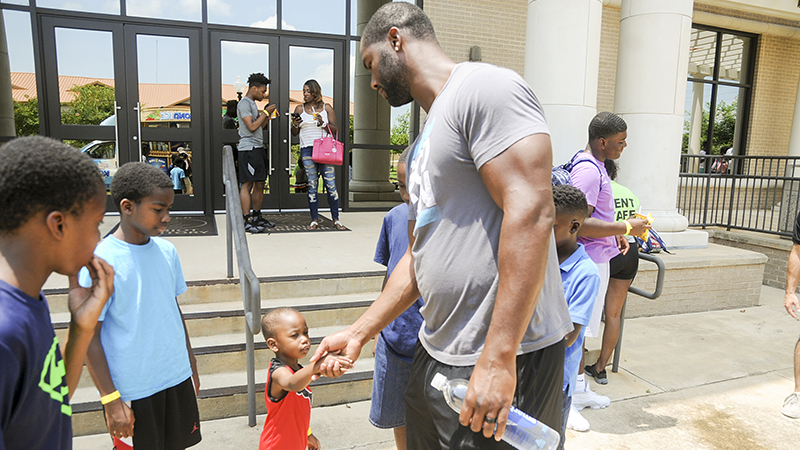 This is the sixth consecutive year that Johnson has put on this event for his hometown. Unlike the camps he also hosts in Selma, the Family Fun Day isn’t about football.

“It seems that everyone enjoys helping out and participating,” Johnson said. “So, I think it’s a good thing, and I’m blessed to be able to do it.”

Johnson looks forward to this event every year since it’s his last break before he returns to training camp. He enjoys helping and interacting with the people. Johnson expected someone might challenge him in a contest looking for a courtesy win.

“No easy W’s. That’s a life-lesson,” Johnson said with a laugh. “You got to work for it. If you beat me, then you worked for it.”

Johnson didn’t have to teach any life lessons on Saturday, but he was still very engaged with his guests.

Saturday was all about community service. Johnson doesn’t charge admission for his Family Fun Day, but instead requests donations to the Selma Area Food Bank. Several boxes worth of canned goods were donated throughout the day.

“It allows kids to come out and not only have a good time, but they’re also doing community service by donating canned goods,” Johnson said. “It’s a blessing to be able to do this. It’s something that brings the community together.”

Members of the community both young and old came out to socialize, play and meet the nine-year NFL veteran from Dallas County High School.

Johnson stayed for the entirety of the event taking pictures and mingling among his guests. At lunch, he joined the event staff serving hot dogs, hamburgers and beverages to everyone in line.

Local kids enjoyed themselves with the variety of activities set out for them. There was face painting, an ATV train ride and even a water slide.

Jamarious Blocton, one of the many kids who got their face painted, is a seasoned Family Fun Day veteran who took advantage of all the activities.

“I’ve been coming here since I was like three-years old,” Blocton said. “It’s so fun!”

The adults got involved too, playing in the BINGO games and participating in the Zumba classes.

Audrey Spicer wore her Bengals jersey to the Family Fun Day which she and her family always look forward to every year.

“I come out because it’s kid-friendly and we enjoy coming,” Spicer said. “We’ve come every year that he’s had this program and we hope he continues to do it.”

Diamonique Kelly brought her nephew to the Family Fun Day because she thought it would be fun for him.

She enjoys the event because it’s a great opportunity to “meet new people, have a good experience and see Michael Johnson,” she said.

The temperature reached 92 degrees Saturday, and many found refreshment at the Kona shaved ice truck.

This year, the MJ93-90 foundation invited New York Life Insurance Group to provide their free Child I.D. services as a resource to parents.

“If anything were to ever happen, they have your fingerprints and picture,” Johnson said. “I think that’s one of the coolest things that we added this year.”

In just three hours, more than 30 kids were finger printed, photographed and registered with the Child I.D. program.

Should anything ever happen to any of the kids in the program, their name, birthday, and other pertinent identifying information is all in one place.

Now that his off-season is officially over, Johnson said he is feeling great heading back into camp for his ninth season.

“This is the last thing I do before I go off to training camp and start a long season,” he said. “So to have that lasting image in my head of people at home, smiling and having a good time, it really energizes me.”

Bengals training camp will begin on July 28, and the season opens against the Baltimore Ravens on Sept. 10.