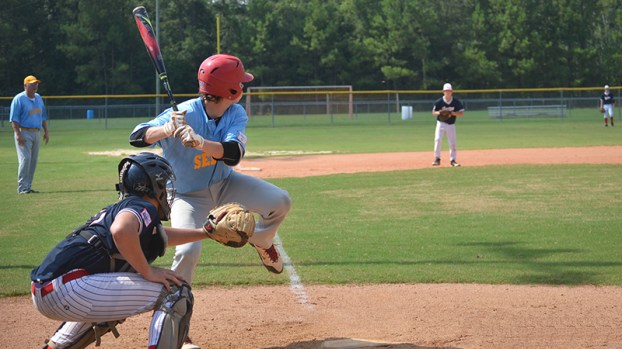 Jacob Peavy steps into his swing at the Dixie Baseball World Series.

15U Selma all-stars advance to semi-finals

The 15U Selma all-stars won both games Saturday to finish pool play undefeated in the Dixie Baseball World Series in Independence, Louisiana.

The team needed to sweep their pool in order to advance to Sunday’s championship rounds.

“We had a great game pitched by Peavy with five strikeouts,” he said.

Peavy was backed up by his teammates who continue to provide more than enough run support.

In each of the first three games of this World Series, the team has put up at least 10 runs. They also have a three-game streak of finishing before the seven allotted innings.

Milam Turner hit his second little league home run of the tournament to help boost the offense. Dion Allen and Tevin Craig both hit stand-up triples in the game as well.

All of the offense has even started to attract the attention of the other teams.

“The surrounding teams are scouting us as one of the best hitting baseball teams,” Waters said.

The teams’ next obstacle was facing the other undefeated team in their pool Marshall, Texas, to decide who will advance to the elimination rounds.

Marshall was, by far, the best team Selma had faced in this tournament. They were the only team to force Selma to play all seven innings.

The team still found a way to win 5-2 over Marshall, despite the tougher matchup.

“We felt good, but we didn’t run the bases very well,” Waters said. “I want the boys to know that I’ll let them know my mistakes as well as theirs. But we were able to overcome them, and we want to move forward and do what we came to do.”

Alex Colquitt started the game for Selma and pitched two innings before being relieved by Amarian Mollete, who earned the win. Matthew Davis came into the ballgame as the closer and recorded the save to end the game in the top of the seventh.

The offense didn’t quite match their earlier production, but still provided enough of a cushion to protect the lead. Molette helped himself with a two RBI double and Joseph Estes brought a run in with a double of his own.

Turner, who finds a way to touch every base in every game, finally settled for just a triple.

Now that pool play is over, the goal of winning the World Series is just two wins away.

The winners of Pool D and E will face-off Saturday night to determine who will play against Selma in the semi-finals on Sunday.

“I would like for the community to keep supporting our team, and thanks to the mayor,” Waters said. “We hope we’re able to bring that trophy home to Selma.”

Halfway through pool play, the 15U Selma all-stars are 2-0 after Friday’s 12-2 victory over Bartow, Florida in the Dixie... read more