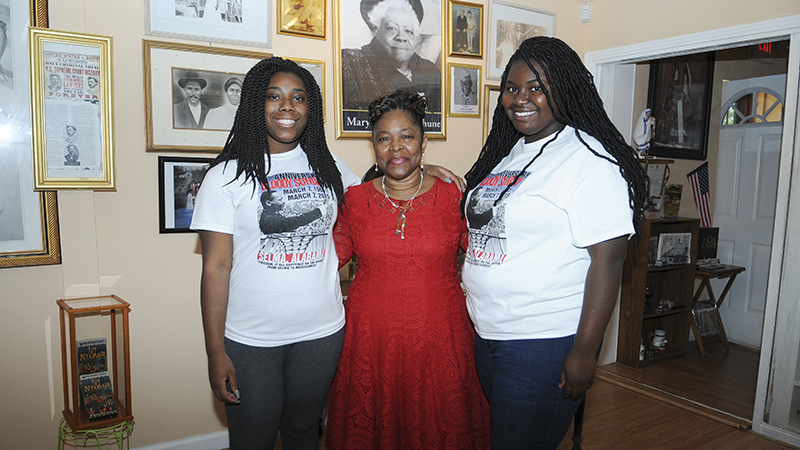 Teisha Green, Carolyn Bates and Catera Pettway pose for a picture Friday during a back to school tour of the J.C. Bates Children Educational Museum.

A Selma High School graduate and an incoming senior spent much of their summer helping Carolyn Bates at the J.C. Bates Children’s Educational Museum.

Catera Pettway and Teisha Green worked at the museum as part of the city of Selma’s Summer Youth Employment Program.

The museum, located at 701 Lauderdale St., was created five years ago by Bates, who runs Selma Disabilities Advocacy Program.

“It’s fun because you learn something new every day from putting a picture up or reading something,” Pettway said. “I enjoyed it a lot.”

Bates said she has had help from the summer program over the last five years, and the youth that spend their summer with her have played a big part in making the museum.

“The summer workers are the ones that actually brainstorm the formal part of the museum,” she said. “They’re the ones that say, ‘Mrs. Bates, you need to categorize this or place this here.’ They help put the museum together.”

Bates said Pettway and Green learned several important skills over the summer they can use in the future.

“They learned how to be curators, and they learned office skills too because they had to do some printing, copying and all of those things and answering the phone,” Bates said. “They also learned customer service.”

Bates said the museum was inspired by her work with children with special needs and her son asking what she was going to do with pictures, newspaper clippings, dolls and other items.

“Most of these things I got out of my house. I saved them over the years. I just saved stuff and saved stuff, and my son got older and said, ‘Momma, what are you going to do with all of this stuff in this house,’” she said. “I said we’re going to put it in the museum and make a museum out of it.”

Green and Pettway helped hang photographs and put several exhibits up, including one that features African Americans that were the first to serve in important roles in Selma, such as mayor, police chief, fire chief and more.

“I learned how to put things up how they’re supposed to be put up and not leaving finger prints and how to do stuff I didn’t know how to do before like office work,” Green said.“I learned that the pictures tell a story, and you have to put the pictures together that have the same story in order to tell something,” Pettway said.

Friday, the two played host to people that visited for the museum’s back to school museum tour.