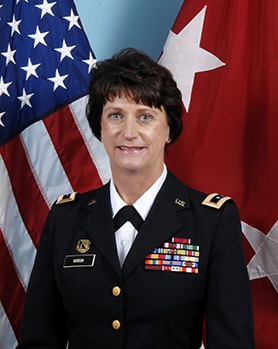 “I am the first female to be a general in the Alabama National Guard at the one-star and two-star level, so it’s just a continuation of a series of firsts,” she said Friday. “I think that it’s wonderful that I can be the role model for all women to know that they can succeed to the highest levels of service in any organization.”

Gordon will take over the role as adjutant general due to the retirement of Maj. Gen. Perry Smith. Gordon’s appointment will be effective Aug. 1.

“General Sheryl Gordon is a trailblazer and visionary leader,” Gov. Ivey said in a press release. “She has had a distinguished military career spanning 33 years. I look forward to serving alongside her as she leads our National Guard troops in Alabama.”

The newly appointed adjutant general said it was a humbling experience to be appointed by Gov. Ivey.

“It’s kind of the culmination of 30 plus year of hard work as an officer in the Alabama National Guard to be selected to lead the entire National Guard — Air and Army — for the state of Alabama,” she said.

“It’s very fulfilling career wise to have achieved this honor and privilege to lead the soldiers and airmen of the National Guard. It’s kind of overwhelming that the governor has placed her confidence in me to do this.”

Gordon said she can serve as a role model for women in the guard.

“They haven’t had someone at this highest level, and they are feeling very good about having someone that’s a girl up there,” she said.

In her role as adjutant general, Gordon will be a member of the governor’s cabinet.

Gordon, who joined the military in 1980, served as an enlisted member of the National Guard before becoming a second lieutenant in 1981.

Gordon said her brother and mother still live in Selma.

Her brother is a former brigadier general in the Alabama National Guard.

By MARY STEWART | The Selma Times-Journal The Ruben Studdard music camp was all about allowing young singers and musicians to... read more