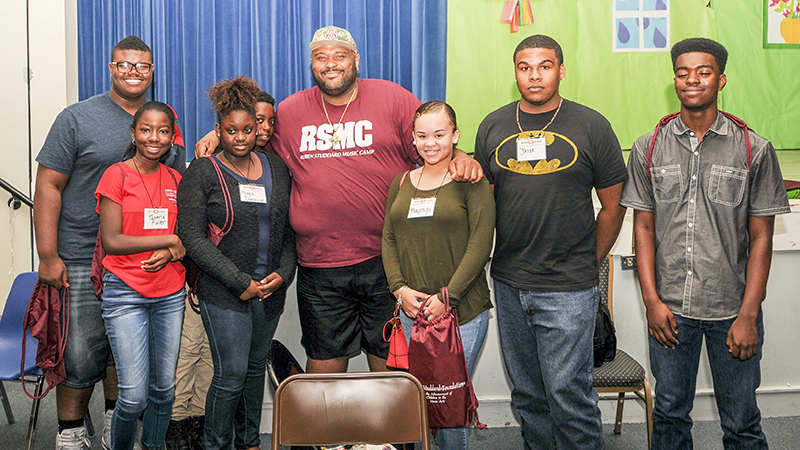 Several young singers and musicians attend a music camp with Ruben Studdard, a Birmingham native and winner of the second season of American Idol.

The Ruben Studdard music camp was all about allowing young singers and musicians to learn more about the business and express themselves.

Studdard, who won the second season of American idol, was excited to share some of the information he picked up over his years in the business.

“This is more of a master class, so we try to like cram a lot of industry information into our group sessions where they can just express themselves and just be creative, but I try to impart a lot of information that I’ve learned over the past 20 years doing this,” he said. “I know the road map that these kids need to take to get where they want to go.”

Ruben has been hosting camps for a number of years now.

The RSMC is hosted each year in Birmingham, but Studdard felt a need to share his knowledge with kids form another area, and Selma was just the place to do it.

“I just felt a desire to help kids in another area, and I just felt like we should come here,” he said. “There are some amazingly talented kids here in Selma.”

Studdard said he had been to Selma several times before for the Bridge Crossing Jubilee as well as on church trips when he was growing up.

Studdard said he was using a non-musical activity to keep the kids eyes on their goals.

“We are probably going to make vision boards today. I think its important to have a visual road map of the things that you want to do with your life,” he said. “You know The Bible talks about writing a vision down and making a plan, and I do this myself.”

He said that he makes a vision board for himself each year to help keep him focused on his goals.

“It’s non musical, but it really is something that can help them stay focused on what their goals are,” he explained.

Studdard was a music education major in college, and though he said he isn’t a teacher, he enjoys the camps and master classes.

“I do get the bug or the itch to do that from time to time,” he said. “So, it gives me the opportunity to do what I wish other famous singers or musicians would have done for me or kids like me in Birmingham.”

He said the camps get more exciting as the years go on.

“When we started, we had kids that were with us for like 6 years,” he explained. “It’s really cool to see that something that I do impacts these young peoples lives in a positive way that makes them want to have a career in music, and its great.”

Studdard has high hopes for the campers in Selma, if they continue to work hard on their craft.

“If you have the desire to actually go really far in music it takes a lot of practice, perseverance and preparation, and all those things are essential to being great at anything,” he said.