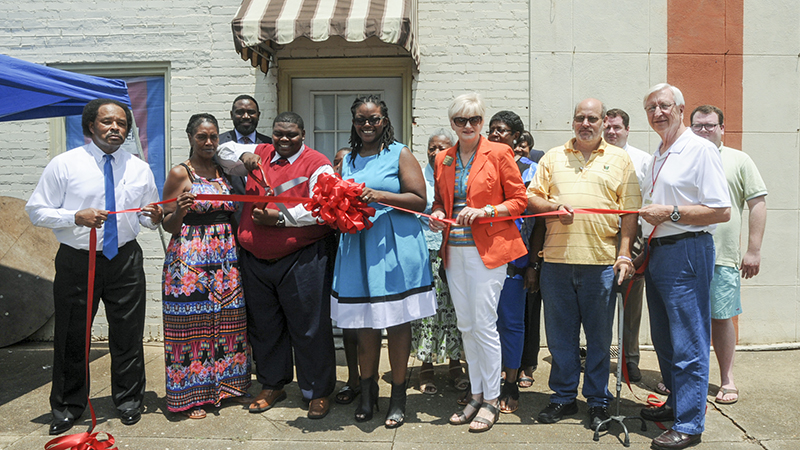 After years of organizing and searching for funding, The Black Sheep Relief Center celebrated its grand opening with a ribbon cutting ceremony Friday afternoon.

Quentin Bell, executive director and co-founder of The Knights & Orchids Society, cut the ceremonial red ribbon before addressing the crowd of family, friends and community members who came out in support of the new center.

TKO is a LGBTQ support organization that offers assistance and resources for lesbian, gay, bi-sexual, transgender and queer or questioning youth and young adults across the state of Alabama and the south.

Johnny Clements was one of the local community members who came out to support the opening of the relief center.

“When you read about what they focus on, and how many groups will be benefitted by what they’re trying to do here in Selma, it’s impressive,” Clements said. “It was very important to me to make sure I was here to support.”

Claretta Lawerence traveled with her family from Miami, Florida, to show their support for her sister and co-founder, Jennine Bell.

“I think it’s a big deal,” Lawerence said. “I can see that this is something that’s going to be necessary to provide support for the people who need it.”

The ribbon cutting ceremony was just the first of several events TKO is having this weekend to celebrate its opening. TKO will also lead a “Protect Yourself” and a professional development clinic on Saturday.

“The clinic is geared to teach LGBTQ people of color how to protect and defend themselves when they are in high-risk situations,” Bell said. “After that we will have the professional development clinic where we will focus on entrepreneurship 101.”

They will end the opening weekend with a music event Sunday at Riverfront Park from 11 a.m. until 4 p.m.

“We try to do something fun that is going to engage the community and try to destigmatize everything around HIV and AIDS,” he said. “This weekend we just want to let our people know that we are here, and if there is anything they need this is where they can come to find it. The sole purpose is to be visible. To show people that there are positive LGBTQ role models in Selma and across the state of Alabama.”

Bell founded TKO in 2012 along with his spouse and financial director, Jennine, and struggled to get funding and grants to help build their startup. They just received their 501 (c) 3 status earlier this year which made it easier to apply for funding.

As a native of Selma, Bell felt that his connection with his hometown was what called him to open the relief center.

“I felt like I had a responsibility to Selma to come back and do the work here,” he said. “This center is important because this is the only place that is a safe space where LGBTQ folks can come to be educated. They can come here and have a sense of belonging with people who understand personally what they are going through.”