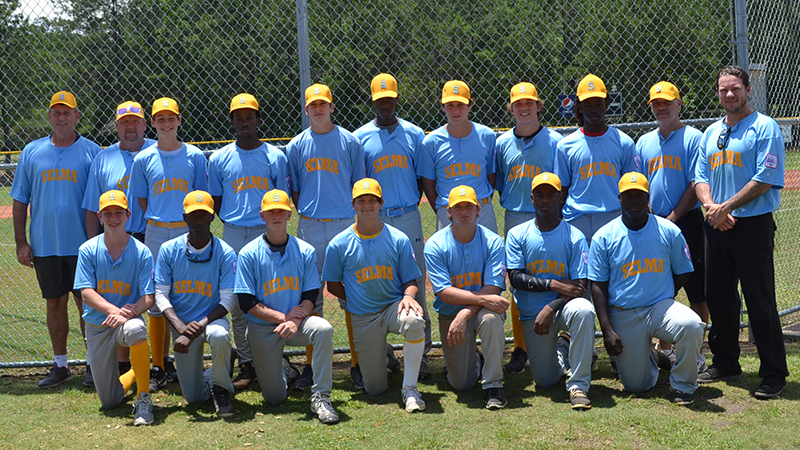 The 15U Selma all stars and coaches are in the World Series in Louisiana.

The 15U Selma all-stars started their World Series trip off with a dominating 19-1 victory over NOLA, Louisiana.

Playing in last week’s American Legions state tournament in Pelham served its purpose in getting the boys ready for the World Series, according to head coach Ricky Waters. He could tell his team came ready to play.

“They were over excited, and we were pumped up,” he said.

As soon as the game started, the team was ready to pounce on its first opponent.

Alex Colquitt earned the win with a shutdown performance on the mound. Dion Allen closed the door even though the score margin was too large to record an official save.

It was 94 degrees on Thursday in Independence, Louisiana, but Selma’s offense was even hotter.

In the first plate appearance for Selma, Milam Turner got the party started with an inside-the-park home run. His hit was the first of many in an impressive offensive performance.

“I think everybody on the team got on base today,” Waters said. “An outstanding job done by the offense today.”

The 18-run lead was enough for the umpires to call the game after only four innings of play.

The good news for Selma is that they got out of the sun earlier than expected, and they get a strong advantage in the pool play standings.

There are 21 teams in the tournament, and they are split into five pools. East Montgomery, Goshen, Opelika and Eufaula are also representing the state in pools A, B, D and E respectively.

Selma is in Pool C along with Bartow, Florida; Gaston, South Carolina; Marshall, Texas; and their first opponent NOLA. The other four pools only have four teams each.

At the end of the first day, Selma leads Pool C. Marshall defeated Gaston 6-4 during the afternoon game.

Bartow has their first game tomorrow morning at 10 a.m. against Gaston.

Only the leader of each pool will advance to the single-elimination semi-finals on Sunday.

Selma plays again Friday at 4 p.m. against Bartow for the second of their four pool play games.

“I’m going to go scout Bartow, and I’ll make the announcement of who I start after I watch them play,” Waters said. “See how well they’re hitting, and if we’ll go with a right-hander or left-hander tomorrow.”

20 Under 40: Mason finds passion in photography