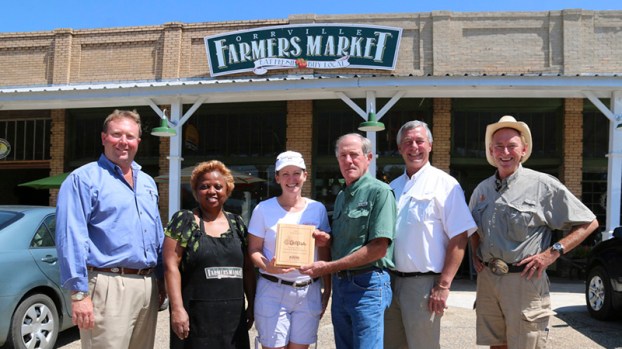 At the end of the catfish pilgrimage, David’s Catfish House of Atmore was named the champion restaurant in the second annual contest sponsored by the Alabama Catfish Producers. Its owner, Rob Faircloth, will receive a championship plaque and $500.

“We have employees who have been with us for 25 or 30 years,” he said. “They’re happy and enjoy what they’re doing. They know our customers and want to make them happy. We can’t thank our customers enough for nominating us.”

David’s Catfish of Atmore is located on South Main Street. Faircloth, whose family was in the restaurant business for decades, opened the franchise location in 1993. While most locations have the same menu, Faircloth’s restaurant offers specials such as catfish and grits topped with gumbo, which was popular with the judges. He also served them baked, fried and lemon-broiled catfish.

“Our fish is some of the best on the market, and we’re excited to see our product go from pond to plate,” Nelson said. “These restaurants dish up a safe, healthy product we’re proud to provide. This is a way of saying ‘thank you’ to them.”

The contest seeks to reward restaurants for serving tasty U.S. Farm-Raised Catfish, Nelson said. It also sets the stage for National Catfish Month in August. Nominations for the award were accepted from March 1-June 12 through Facebook and AlabamaCatfish.org.

Other finalists were Swamp John’s in Red Bay, Catfish ‘N’ Que of Cullman and the Orrville Farmer’s Market in Orrville. The top four restaurants received a finalist plaque during judging July 13-14.

This year’s contest also featured a “People’s Choice Award” where customers voted online for their top pick from the final four. More than 2,750 customers voted from July 11-19 to select the winner. It was a fierce competition, but in the end, David’s Catfish House in Atmore got the most accolades.

Hunter said he knew two things going into the contest. First, he wouldn’t have to look far to find great catfish; second, deciding which was best would be difficult.

“I was right about the great catfish,” Hunter said. “Although there was only one winner, all of them were fantastic. I can’t wait to go back to any or all of them again.”

Allen described judging the contest as a delicious experience where he gained more appreciation for catfish farmers.

“Sid and Townsend both raise catfish, and it was especially interesting to see them interact with the restaurant owners and personally thank them for serving a product they grow,” Allen said. “Our state is fortunate to have some of the best farmers in the world, and I can testify restaurants in our state definitely cook some delicious catfish.”

Kyser said he enjoyed judging the contest and connecting with the restaurants’ owners.

“It was awesome for me to see people so passionate about preparing the very product I produce,” he said. “Each of these fine restaurants made me proud to call myself a catfish farmer. I look forward to revisiting them when I’m in the area.”

Catfish production has a $158.2 million economic impact on Alabama and provides more than 5,800 jobs. The Alabama Catfish Producers is a division of the Alabama Farmers Federation, the state’s largest farm organization with more than 356,000 members.

Suspect in January shooting extradited to Alabama from Miami

A 20-year-old Selma man wanted for a January shooting has been extradited back to Alabama after being arrested in Miami,... read more