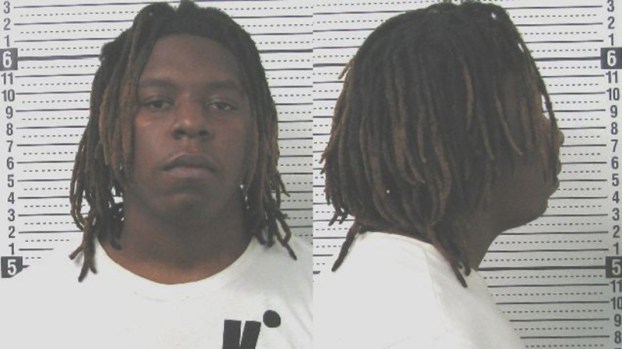 Markeese Halliburt, 20, was extradited back to Selma from Miami, Florida, for charges related to a January shooting.

Suspect in January shooting extradited to Alabama from Miami

A 20-year-old Selma man wanted for a January shooting has been extradited back to Alabama after being arrested in Miami, Florida.

According to Detective Willie Calhoun with the Selma Police Department, a warrant was issued in February for Markeese Halliburt for a Jan. 31, 2017, shooting.

Halliburt has been charged with first-degree assault and discharging a firearm into an occupied building. He is being held on bonds totaling $90,000 at the Dallas County Jail.

Calhoun said the shooting happened on the 1100 block of Philpot Street between 7:30 p.m. and 8 p.m. Halliburt allegedly shot a man in his mid-30s during what is believed to be an attempted robbery.

The victim was struck one time in the shoulder.

Halliburt was also charged with leaving a treatment center, according to an arrest report from the Dallas County Jail.

“He had an outstanding warrant in Dallas County District Court for contempt of court,” Calhoun said. “He left the Center of Hope up in Anniston.”

Calhoun said Halliburt was out on bond for a prior shooting when the January incident took place.

According to a previous Times-Journal report, Halliburt was arrested in 2015 when he was 18 years old for allegedly shooting a 53-year-old Selma woman on the 1200 block of St. Phillips Street on Oct. 17, 2015. Torrey Lewis, who was 21 years old at the time was also arrested in the case.

An incident report from the Miami-Dade Police Department states Halliburt was arrested for aggravated assault with a firearm after an argument in the parking lot of an extended stay hotel in Doral, Florida, on June 6.

According to the report, Halliburt and two other males drove from Montgomery, where Calhoun said Halliburt recently moved to, to Miami.

“Upon arriving in the parking lot of the hotel, the defendant and the victim began to argue while discussing how they will pay for the hotel room,” the report states. “The argument escalated and at one point the defendant reached into the Chrysler’s trunk and pulled out a black firearm.”

Halliburt allegedly put the barrel of the gun to the victim’s head and said, “you don’t know me,” several times.

“The victim, fearing for his life grabbed onto the firearm and attempted to wrestle the firearm out of the defendant’s hand,” the report states.

The hotel manager called the police, and Halliburt was arrested and taken into custody.

“He had a court date at the end of June, so we had to wait until after that, and then they contacted us and told us he was ready for pick up, so we went down there to get him,” Calhoun said.

According to court records, Halliburt is scheduled for arraignment on July 20 at 9 a.m. in Judge Robert Armstrong’s courtroom.

Keith made lasting impact on courts

Julian Parke Keith was a third-generation attorney that left a lasting impact in the courtroom and on the law community.... read more