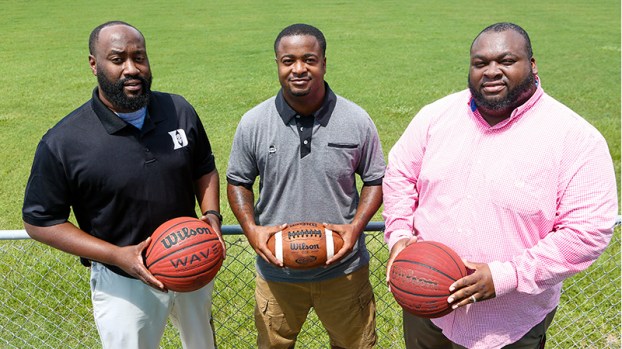 “We couldn’t have gotten a better group of teachers and coaches for our students at Dallas County High School,” principal Willie Moore said.

Just under a month before school begins, the three new coaches must get acclimated to their new roles quickly.

Matthews has a particularly challenging obstacle in switching to a new school and taking on additional responsibilities.

In his previous position as the defensive coordinator at Selma High School, Matthews only had to worry about his side of the ball. Now he’s got the full set of keys and aims to keep moving the program forward.

“The coaching switch is sort of last minute, but I’m just eager to get out here and step out on faith,” he said. “I’m excited for this opportunity and the chance to meet these kids.”

Unbothered by the quick turnaround, Matthews said he doesn’t foresee to many obstacles in starting his new job. He already has a parent meeting and the first workout on his schedule.

“We’re going to hit the ground running Monday,” he said.

“I don’t want to do anything differently. I just want to build on their success. They’ve been a playoff team the last two years.”

Last year, Dallas County lost in the first round of the playoffs to end the season with a 6-5 record. In their losses last year, they allowed at least 25 points. Matthews experience on the defensive side of the ball should help Dallas County solve that problem.

“Coach Matthews came highly recommended, and he has a vast knowledge of the defensive side of the football,” Moore said.

The boys basketball team will see an in-house promotion as Cliff Nix will take over for Willie Moore as the new head coach. Nix has been the assistant coach for the Hornets for the last 10 years.

“He was my hand-picked selection to succeed me as a basketball coach because I believe in people paying his dues, and he has paid by working from the ground-up within our program.” Moore said.

This will be his first head coaching job for a high school varsity unit.

“I give all the glory to God,” Nix said. “I’ve been waiting humbly and putting in hard work. I had an excellent leader in coach [Willie] Moore.”

As the torch passes, Nix doesn’t plan on changing too much.

The boys basketball team had a great season last year and finished with a 18-6 record. The Hornets were also 7-1 against ranked teams. Nix’s main obstacle will be to get through the teams’ rebuilding phase.

“We’re going to be really young, and I want to make sure these guys are ready to go and battle tested,” he said. “The biggest challenge will be trying to keep Dallas County at the level it’s been the last 10 years. Now we’re in a big rebuilding stage, and teams aren’t going to take it lightly on us.”

Jackson will be taking over the girls’ team this year. Last season the team finished just below .500 with a 9-10 record. The team played better towards the end of the season after a rough 1-6 start.

“I’ve been a head basketball coach for 10 years,” he said. “I’ve been to three Final Fours and a state championship in 2010 with Sumter County.

Jackson’s pedigree as a successful coach is what made him the best candidate for the job.

“Most people that know him, know he’s an outstanding coach in his own right,” Moore said. “For us to get someone of his pedigree is important.”

He is looking forward to meeting his new team and sharing his knowledge of the game.

“This is a great opportunity to take on another challenge,” Jackson said. “I’m excited to get started here at the school.”

Dallas County has taken care of the immediate needs with football and basketball, but principal Moore is still conducting his search for the right baseball and softball head coach positions for the school.

By MARY STEWART | The Selma Times-Journal Coming home to Selma was never in the plan for Woody Jones, but... read more