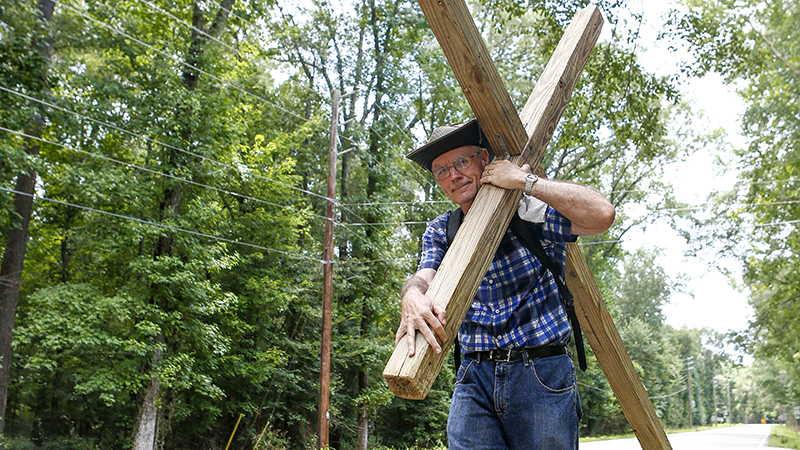 Daniel Martin carries a cross Monday along Highway 219 in Selma during his quest to pray for every house and every business in Selma.

House by house, street by street, pastor Daniel Martin of Bethel Church carries a 12-foot-tall wooden cross as he prays for the people of Selma.

“In 1987, I felt like God told me to take a 12 foot by 6 foot cross and walk every street, pray over every home and every business,” Martin said. “I’m just asking God to cover our homes with the blood of Jesus.”

He said before it took him about four to six months to completely cover the city by walking every day, but this time he is walking every Monday, Wednesday and Friday. He has no set time each day, and just walks as far as he can, which he said varies depending on who all he meets and talks to.

“How far I can go depends a lot on how many people I meet,” Martin said. “Children in the past years that I’ve done this will just come flocking. It just thrills me [to speak to people] because all I’m doing is toting the water, God has to make the difference.”

Martin began last week at the foot of the Edmund Pettus Bridge and plans to circle the city before taking on the streets inside the city.

“Right now, our city just desperately needs hope,” Martin said. “We have so many hopeless people. So many people that have no hope in their lives at all. Some through wrong choices, some through choices that were made for them.”

Martin has the New Testament and cards that say “God has a good plan for your life. No matter where you are, no matter why you are where you are,” that he is handing out to people as they stop to speak with him.

“I tell it to people everywhere I go –– Wal-Mark, fast food place, God’s got a good plan for your life,” Martin said.

“I’ve found that those eight words knock down barriers, knock down walls and I haven’t met anybody that didn’t want to know somebody had a good plan for their life. We just need hope.”

Martin said that even at 68 years old in the 100-degree weather, he’s able to walk with the cross because of the strength given to him by God.

“God made me in such a way that heat doesn’t bother me as much as most. But what keeps me going is just I’ve got great hope,” he said.

Martin said there’s a lot of people praying for him and praying for the city, and that keeps him motivated and pushing on.

“The real strength behind this, is there are literally hundreds of people praying for this,” Martin said. “That’s the power of the walk. It’s not me carrying a cross, it’s those that are praying and God’s hearing those prayers.”