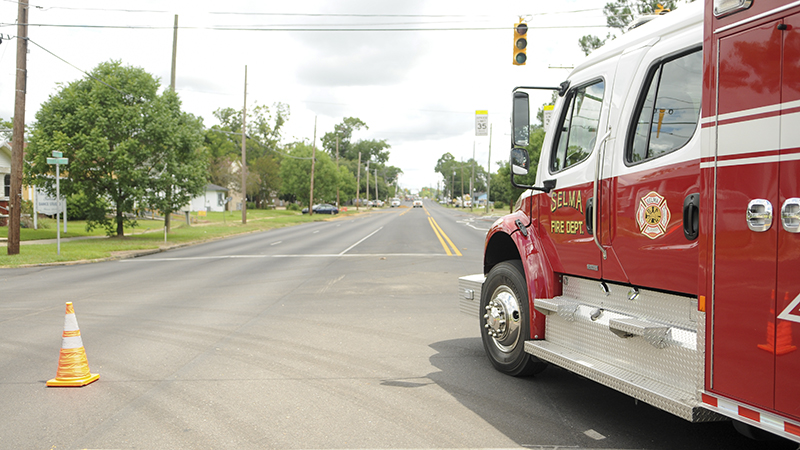 Broad Street is closed off between First and Sixth Avenues after an early morning gasoline spill. (Blake Deshazo | Times-Journal)

A section of Broad Street was closed off for most of the day Saturday after hundreds of gallons of gasoline spilled into the roadway from an accident involving an 18-wheeler tanker truck.

The accident happened between 5 a.m. and 6 a.m. just in front of Selma High School. A fully loaded tanker truck was traveling east on Broad Street when it snagged a low-hanging power line and pulled down a power pole. The pole hit the tank, puncturing it and causing the gasoline to spill out.

“It was just pouring out of there. It was gushing out of there,” said Sherith Smith, who lives just a block from where the accident happened. “They lost a lot of gas.”

Smith said she was asleep but woke up after the power went off.

“I woke up this morning, and the lights were off, the fan and the air conditioner. Everything went off, so I came outside,” she said. “This man down the street was telling me not to go close because the gas was spilling and coming out of the tank.”

Toya Stiles, director of the Dallas County Emergency Management Agency, said the tanker truck was from Sun Oil Company, and the cleanup was being handled by SWS Environmental, a company that specializes in cleaning up gasoline and oil spills.

The gasoline that didn’t spill out was transferred to another truck.

Carnley said the truck was headed to the Shell gas station at the corner of Furniss and Broad Street when the accident happened.

“From what we were told by two different people, a car hauler had come through there this morning, and they’re the ones that caught the powerline down and broke the pole in half,” he said. “When my driver came through there shortly after, he saw the pole hanging over and the line, so he got over into the middle turn lane to avoid it, but there was a second line, and he didn’t see the second line.”

The truck pulled the pole down, and the transformer hit the back of the tank. The driver was not hurt, but he was shaken up.

“He was kind of shook up and upset about it because he’s been hauling gas for about 35 years, and he’s never had nothing like that to ever happen,” Carnley said. “It kind of had his nerves up, and he was nervous that someone might light a cigarette up or a spark or something would happen.”

The Selma Fire and Police Departments responded to the scene, as well as Alabama Power. Phone calls and emails to the company to see when power would be restored were not immediately returned.

As of noon, the spill had not been cleaned up. Stiles said the cleanup crew was coming from Birmingham and was slowed down due to an accident on the highway.

Carnley said cleanup company estimated the work to take about an hour to complete.