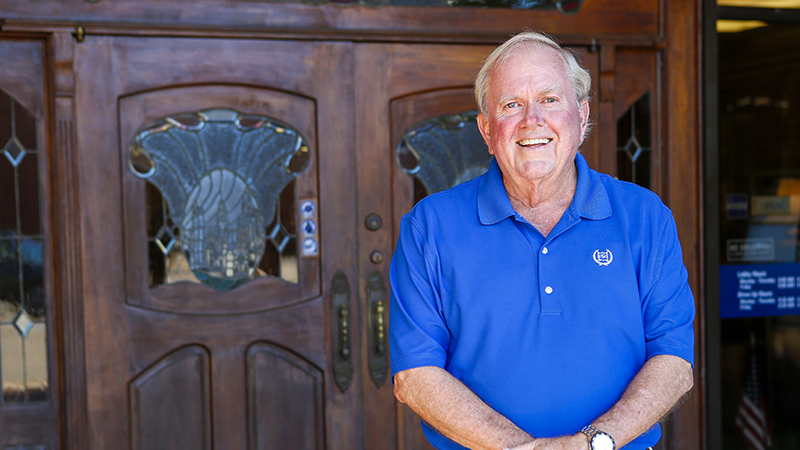 Ed Livingston retired at the end of June as regional president for Trustmark Bank. He says he plans to enjoy retirement by spending time with his family and golfing and use what he learned in banking and management to help others through ministries at Church Street United Methodist.

Ed Livingston found his passion for management through mission work and has put it to good use in the banking industry.

Livingston, 70, retired June 30 from being the regional president for Trustmark Bank.

“I just knew that it was time for me to retire,” he said.

Livingston plans to spend his new-found free time spending time with family, golfing and helping out at his church, Church Street United Methodist.

“My passion is management. I’ve always enjoyed management, and I’ve taken one of these like psychological tests that say what I’m best at is management — its true because that’s exactly what I love,” he said. “I love teamwork. I love putting together a team, working with a team, being successful as a team, and working with our customers which make it all possible.”

Livingston has plenty of experience working with a team as he has been in the banking industry for 44 years. He has worked at banks in Selma, Brewton and Mobile, and he also did four years of active duty in the United States Air Force.

During his years of duty, he was ordered to go to Craig Air Force Base in Selma. He and his wife Andrea decided that they wanted to raise their growing family in Selma, so Livingston began to search for a job.

His love of people and passion for management called him to help rebuild a church that was burned down.

“When the New Liberty Baptist Church was burned, something just told me somebody has to do something,” he said.

Livingston compared rebuilding that church to the way he builds up banks.

“Well, it’s like building anything; it’s like building that church. You got to start with the base, and for the bank the base is the employees,” he said. “You hire the right employees for the right jobs, you train them and then you work with them in a management capacity to get the job done.”

Livingston said that the success with everything he’s ever done in the banking industry is because of other people doing the right thing and enjoying what they do.

Livingston did not grow up in Selma, but he said that he considers Selma his home and wouldn’t want to live anywhere else.

“The people, our friends and neighbors — I’ve always said if you have any kind of a problem in your life, your Selma buddies will not let you down,” he said.

He puts great value in the people in Selma, and he has high hopes for our city’s future.

“Well obviously, like all of us, we all hope and pray that Selma will continue to get to be a better place to live. Selma’s like any other community, there’s nothing perfect about Selma. There’s nothing perfect about any community,” he said. “The only way the community can be where they want to be is with everybody working together for the same positive goals, and I think we are on the right track.”

CORRECTION: A previous version of this story stated Livingston was in a U.S. Marine. He was in fact in the Untied States Air Force.