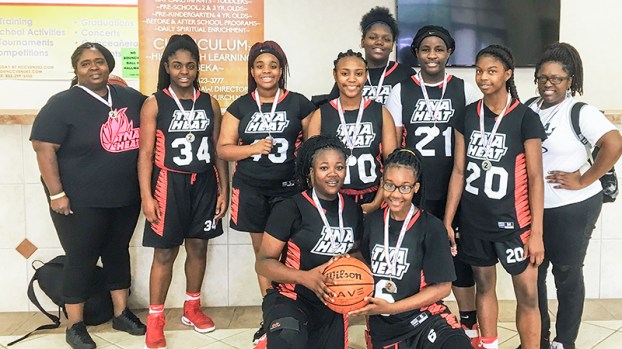 The TNA Heat high school girls basketball team traveled more than 600 miles to compete in the Kings and Queens of the South Classic in Houston, Texas this past weekend and finished second in the tournament

Head coach Letti Hasberry and assistant coach Lamesha Richardson led their eight girls on a nine-hour expedition and returned to Selma with medals.

“They played well throughout the tournament,” Hasberry said. “Each and every girl stepped up and played a significant role in our wins.”

The team started pool play strong on Saturday with a 40-15 blowout against the Texas Evolution and a 35-25 win over TFP JV North.
Sunday morning the winning streak continued as they beat TVP JV North again 34-15 to advance to the championship.

Unfortunately, the team’s perfect run was interrupted by the Texas Storm in a 49-26 loss.

“In the championship, they just couldn’t for some reason come together to pull it off,” Hasberry said.

This was the first time they had ever competed in this tournament, and it was coach Hasberry’s first time in Texas. She and a parent took turns driving a rental van more than nine hours to reach their final destination.

“[The girls] were excited,” she said. “I don’t think any of them except for maybe one has ever been to Texas. Each year, we do one big tournament out of the state of Alabama.”

The competitive travel basketball club had participated in several tournaments leading up to their only out-of-state tournament of the summer.

Even though the high school girls’ travel season is over, Hasberry still has one more trip on her schedule.

The middle school TNA Heat girls’ team are preparing for a road trip to Navarre, Florida, a coastal city approximately 182 miles south of Selma, for their final tournament of the summer.

However, they are going to need a little help from the community in order to make the trip.

The TNA Heat Basketball Club will be hosting an alumni charity basketball game on July 16, at Wallace Community College to raise money for the team to play in the Navarre Coast Classic on July 21-23.

Southside High School alumni basketball players will participate in an old school vs. new school game, a men’s and a women’s game for entertainment. The charity event tips off at 3 p.m. and admission is $2.

The club is raising money to help cover tournament fees, transportation and lodging for the team.

“The last two tournaments that we hosted acted as fundraisers to help our girls’ travel as well,” she said. “We have a couple hundred, but the goal is $1,000.”