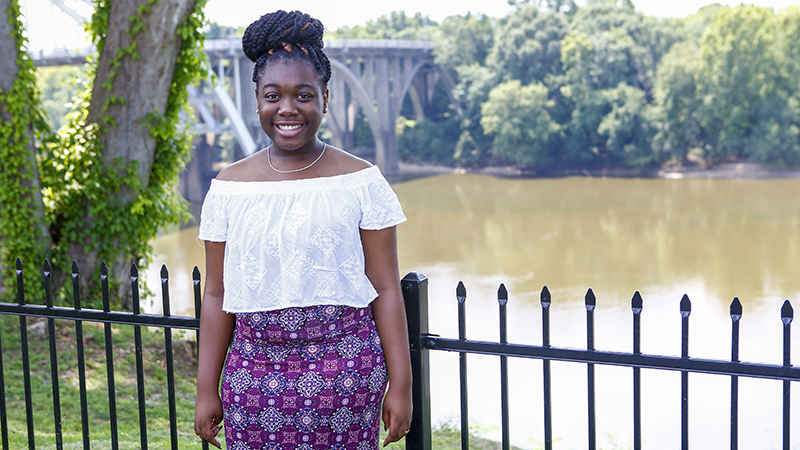 Valerie Johnson, 15, has been chosen from more than 400 applicants for one of 70 spots at the youth conference.

Selma Alumnae Chapter of Delta Sigma Theta President Dr. Shercia Hatcher said it was a huge honor for Johnson to be chosen for this conference.

“It’s a presidential youth conference. So we work with the Delta Gems within the community, and we wanted to encourage the Gems to apply,” Hatcher said. “They had to submit an application, do an essay and different things like that so that they can be recognized, and then they can learn leadership on a different level as we do in the different chapters.”

Johnson first heard about the conference in late April, but she wasn’t sure she was going to apply.

“Ms. [Althestein] Johnson, the Gems advisor, kept sending the email because she really wanted someone to do it. So she was like pushing us, and my mom kept making sure that I wrote the essay,” Johnson said. “I told (my teacher) about it because I was like ‘I don’t know what to do; I want to make sure that it’s perfect,’ and they were pushing me. I had a lot of people behind me helping me.”

Johnson and her mother, Aesha Washington, were in the car when she got the news that she was going to the conference.

“[The Gem advisor] called us, and she was like, ‘I just want to let you know that you have been selected.’ I was just happy,” Johnson said.

Washington said she was proud of her daughter and was surprised by how big of an honor this was.

“I didn’t realize she was chosen from the Southern region. I just thought it was the Delta Gems in this area, but for it to be in the Southern region makes it that much more important,” Washington said. “She’s a very ambitious young lady.”

Hatcher and her chapter are excited for Johnson and hope many more will follow her.

“We are elated. This is our first time, and we look forward to many more,” Hatcher said. “We are just excited that someone else will get to embrace upon what we instill in them on a month to month basis.”

Hatcher said her chapter works with the Gems in many ways each month including food, clothes and even blood drives.

“We have different speaking forums per months, and they have a monthly meeting on the second Saturday,” she said.

“We do a variety of everything.”

Johnson joined Delta Gems one year ago and said it is very fun, and she loves the girls who are also in the program.

“It’s a lot of volunteer work and a lot of speaking because they basically want to help us grow,” she said. “I’m really happy that I did it. It’s worth — it I love it.”

Johnson was recently accepted to the Alabama School of Math and Science, where she will attend school in the fall.

“I really want to be a lawyer. I really just want to help people basically,” Johnson said. “That’s what I wrote about in my essay; how I wanted to help people in my future.”