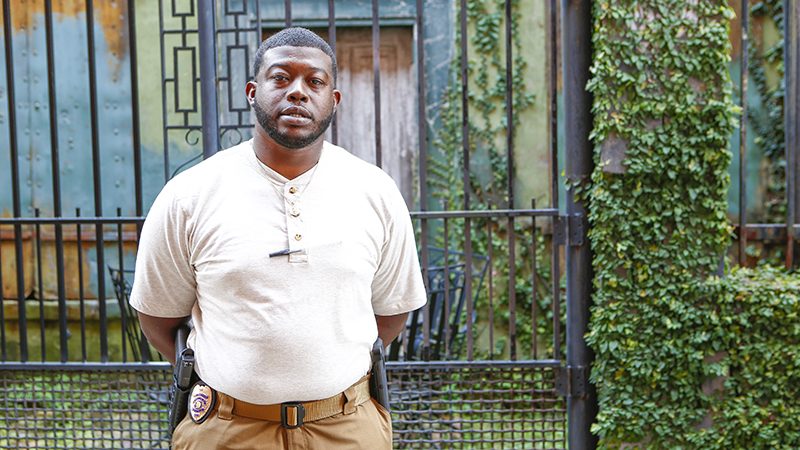 Devan McGuire has been on the Selma Police Department force for three years now and serves as a detective.

Devan McGuire has been on the Selma Police Department force for three years now and serves as a detective.

He is originally from Selma and graduated from Southside High School before attending Alabama State University among other schooling. He has also been in the Army National Guard for nearly 10 years and served two tours overseas.

He has a daughter, D’Undreia, who is 7-years-old.

For him, serving the public is something he knew he wanted to do at an early age.

“As I was young, I just always respected officers, and I always wanted to try to help my city,” McGuire said. “I just felt like it was a great position to be in to honor the city and help deter crime.”

McGuire said he owes his success to his mentors and the guys that helped him along the way, and he hopes to be that role model for new members coming in.

“When I first started, I had a lot of mentors that were on the force and they’re still mentoring me now, helping me out,” he said. “I try to help other young officers that come in the door.”

McGuire said he enjoys serving people and doing his best to make others feel safe and happy.

“I value helping people. I like being a first responder and I like helping others no matter what the situation is, I like to help,” he said. “It makes me feel good inside that I can help someone on the other end.”

For McGuire, seeing people go through difficult times is hard, but he tries to do his part as a policeman to make their lives better.

“One thing that is hard is seeing a lot of people struggle,” McGuire said. “We have a lot of people in Selma that struggle and you just have to try to give them encouraging words and tell them it’s going to get better, and you have to do your job on your end to make sure it does get better for the citizens.”

McGuire’s plans involve staying in Selma and working his way up.