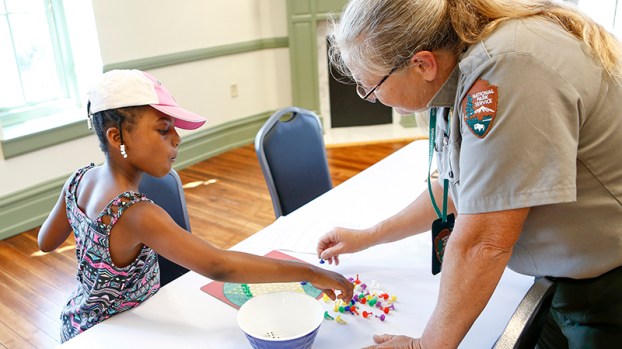 Park Ranger Theresa Hall took the kids back in time with games from the Voting Rights Movement and taught them how to play.

“It brings them in and I think that they see the photographs and see some of the exhibits too,” Hall said. “They’re learning and they don’t even know it.”

“I wanted to learn about the history. I wanted to further my education on Alabama history,” Johnson said.

“It’s really fun with the different games you get to play and it’s fun because you have a different variety of stuff to do. It’s exciting to learn about what they used to play back in the old days.”

Hall taught the children games like 4-square, jacks, hopscotch, sticks, card games, Chinese Checkers and more. They were running around, trying out the different games and competing against each other.

“Jacks is probably one of my most favorite games ever. Me and my sister would play would play for hours. The kids seem to like them too,” Hall said. “Back then we didn’t have all these video games and TV channels.”

Palmira Frye brought her 4-year-old daughter, Kiani, to participate while they were in town from Colorado for a family reunion.

To her, it was more than just learning games.

“We came downtown to just see stuff to do and my husband and his family decided this would be a good stop because we want the younger generations to be familiar with what happened,” Frye said of the Voting Rights Movement.

“I’m not sure she can grasp the idea of what this means, but maybe with playing the games she can a little bit.”

Kiani looked out of the third story window at the Edmund Pettus Bridge, a symbol of the movement, and her mom snapped photos of her doing so.

“There’s a lot of history here. It’s pretty nice to be right here and see it,” Frye said. “It’s like a future that’s been opened for her. It’s an amazing feeling actually to see my little one looking out.”

A second capital murder suspect wanted for the drive-by shooting death of a 17-year-old Ellwood student Monday has been captured... read more