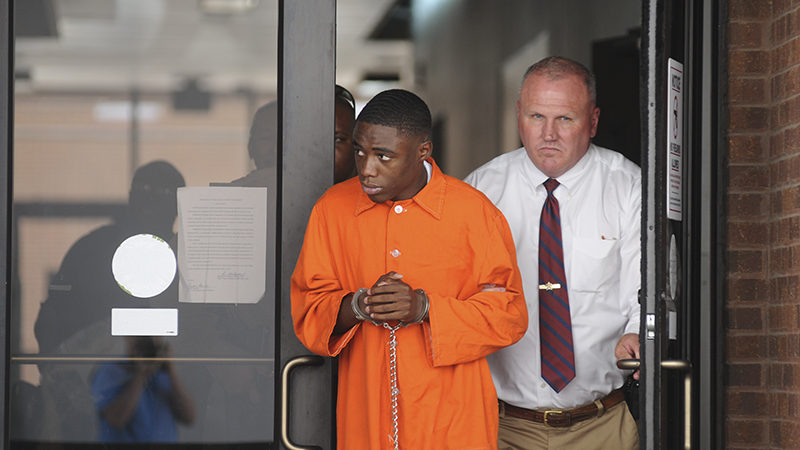 A Selma teenager arrested for capital murder in the drive-by shooting death of a 17-year-old appeared in court for the first time Wednesday.

The Selma Police Department also issued capital murder warrants for three other suspects allegedly involved in the homicide. Markel Collins, who was arrested Monday night after Christopher Devon Lee II was gunned down in front of a Washington Street home earlier that day, was arraigned by Judge Collins Pettaway Wednesday at the Dallas County Courthouse Annex. Collins, a circuit judge, said he was acting as a special appointed district judge for this case to speed the process up due to the case load of other judges.

Pettaway informed Collins of the capital murder charge the 16-year-old is facing and appointed him an attorney. Montgomery attorney Bill Whatley, who Pettaway called “one of the best in the state” will represent Collins, along with Tarackia Barge. Whatley said he handles capital murder cases in several different counties.

Collins did not enter a plea. Whatley said he may file a motion for a bond hearing after he has had time to assess the case. He also requested a preliminary hearing for his client, which Pettaway scheduled for Aug. 2 at 2 p.m.

According to a probable cause warrant read by Pettaway in court Wednesday, Collins was identified by witnesses as the alleged driver in the shooting.

The shooting was called in to police at 11:40 a.m. Monday morning from a home on the 1500 block of Washington Street — just behind Payne Elementary School. Investigators with the Selma Police Department responded shortly after. Multiple ambulances responded, but Lee was pronounced dead on the scene.

According to Lt. Tory Neely with the Selma Police Department, Lee was on the front porch of the home when a car drove by and fired multiple shots. Neely said Lee was hit multiple times before he could make it inside the house.

Neely said the fatal shooting is believed to be retaliation for an earlier shooting. The home Lee was killed in front of was shot up early that morning around 3 a.m. Several hours later — just after 10 a.m. — a home on Matthew Lane was shot up. According to an arrest report, Collins lives on Matthew Lane.

Dallas County District Attorney Michael Jackson said the shootings are possibly gang related. He also said Collins’ home has been shot up several times in the past.

“That household has been shot up a lot of times,” Jackson said. “You have a rivalry between the DTE group and the Washington Street gang.”

At this point in the investigation, it is unknown if Lee had anything to do with the shootings that happened earlier Monday.

Lee was a star basketball player at Ellwood Christian Academy. He helped the Eagles make it to the final round of the Central Regional of the Alabama High School Athletic Association’s basketball playoffs.

“It’s a sad situation where you have a young person’s life snuffed out, who had a possibly very bright future playing basketball and maybe going off to college on a scholarship,” Jackson said. “Then this other young person whose only 16 also just beginning life, and now his life is messed up and destroyed. It’s just a blight on the community.”