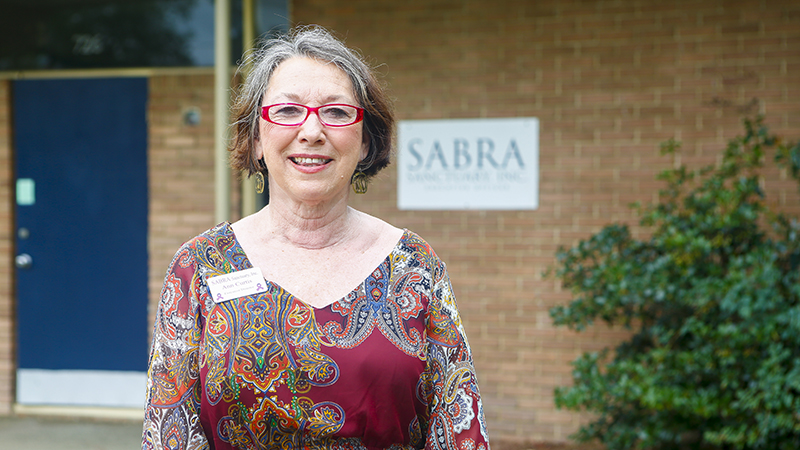 Ann Curtis has started has the new executive director of SABRA Sanctuary, a shelter for women and children who are victims of domestic violence.

Ann Curtis began serving in the position June 1 and is beginning to settle in.

“I’ve been a social worker in this community since 1974,” Curtis said of her experience.

She has worked for Dallas County Department of Human Resources, psychiatric unit at the Selma Medical Center, social work department at Vaughan Regional Medical Center, hospice and Warren Manor. She also served on the SABRA board of directors in the past.

Curtis has had a busy month with the summer months being a key time for grant writing, and grants are a vital asset to the organization.

“I have come in at a very precarious time because it’s when the grants are due,” Curtis said.  “Domestic violence shelters and their staff are pretty much funded through different state grants. We’re very busy right now.”

Curtis said she wanted to lead SABRA because she knows what kind of impact it has on the community, and she is looking forward to helping the women and children in the community that use the service.

“Anybody that is in social services or law enforcement or any helping arena, when you’re exposed to battered women, and sometimes battered children as a result of trying to stop domestic violence, if you have any compassion at all it’s going to tug at your heart,” she said. “I think it speaks volumes. We’re talking actually save people’s lives.”

Curtis said SABRA is a much-needed organization in the community, as generations of children have grown up around domestic violence and learning the traits that their parents had. Breaking the cycle is a goal of hers.

“We’re looking at second and third generations where individuals did not know how to handle conflict resolution and one of the things that we are looking forward to is working with the children in our community and other counties to help them learn a better way,” she said. “There is a huge need with the violence that Selma has and the outlying counties.”

Curtis said one of the biggest things they struggle with is getting victims to come forward and tell of their situation.

“I think our biggest hurdle is getting the victims to come forward, especially in the very rural areas,” Curtis said.

But she hopes that she can work toward helping everyone that might need the service.

“It’s a great opportunity, and I’m committed to help anybody in any way I can in our community that’s in need of help,” Curtis said. “We have wonderful community support and that helps as well.”