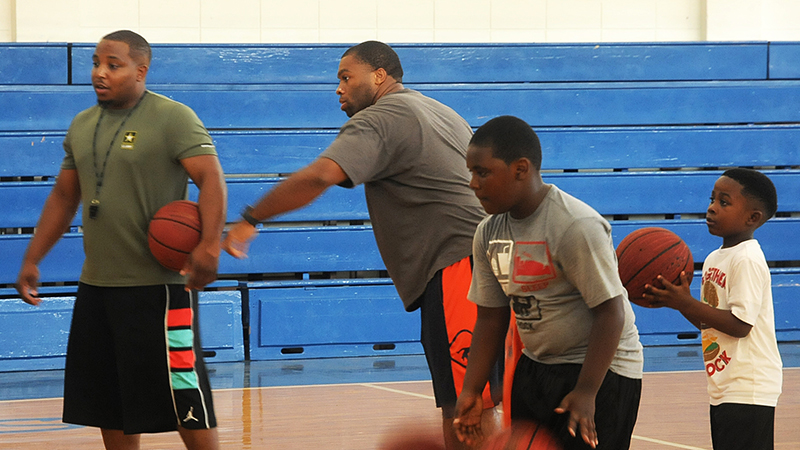 Brandon Holmes put on his second annual Dollar and A Dream basketball camp on Saturday at Selma University.

Brandon Holmes put on his second annual Dollar and A Dream basketball camp on Saturday in Selma University’s gymnasium.

Children got the opportunity to participate in a basketball camp that went over the fundamentals of the sport for only $1.

All children between the ages of 6 and 17 were able to participate. The camp started at 9:30 a.m.

“We wanted to try to create an opportunity for kids that might want to go to a basketball camp, but it is too expensive for them,” Brandon Holmes said. “We are attempting to give them that same experience of going over the basic fundamentals of basketball.”

Holmes knows the challenge of trying to come up with money during the summer to attend camp. He remembers when he was a kid and the prices that his parents had to pay.

This is the second year that the camp has taken place. Holmes’ Selma upbringing led him to want to give back to his community in this way.

“Growing up in Selma, I saw the struggle of trying to come up with money during the summer time for camps with all the travel and food expenses you have to think about before even attempting to go,” Holmes said.

Several former basketball players from around Dallas County were on hand to assist Holmes with the camp.

William Lee, former Dallas County center and current UAB player, was in Selma to help with the camp.

Lincoln Glass who played for Auburn University from 1996 to 1999 also assisted with the camp.

There are plans in motion to improve the number of kids that attend the camp in the future.

The camp has had pretty good turnouts both years.

Holmes also puts on a camp for children in Montgomery.

“I want the kids to work on their game and learn that in order to be good at anything, you have to spend time doing it,” Holmes said. “That is just not with basketball, that’s with school and with whatever they do in life.”