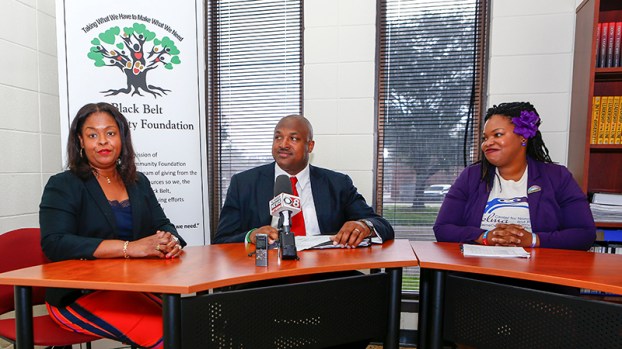 The Black Belt Community Foundation (BBCF) held a press conference Friday with the Selma Center for Nonviolence, Truth and Reconciliation to explain some of the ways a $3 million grant will be used for racial healing in Selma and the Black Belt.

“It is really and truly just a beautiful thing that this region has $3 million that it had not seen before. I think that says quite a bit,” said Felecia Lucky, president of the BBCF. “Think about your own money. You don’t invest it if you think it’s just going to be burned up and thrown away. You want to make an investment in something you think is worthwhile.”

The grant was awarded to the BBCF by the W.K. Kellogg Foundation. Selma was one of 13 cities and one state that received grants from the foundation to support Truth, Racial Healing and Transformation (TRHT) work in Selma.

According to the Kellogg Foundation, the TRHT process is a “multi-year, national and community-based effort to engage communities, organizations and individuals.”

Robert Turner, TRHT project director, said there are five parts to the process — narrative change, racial healing, separation, the law and the economy.

“It’s not an initiative, it’s not a project, it’s a process of engagement that really has no ending date because the true goal for this is to bring about truth, racial healing and transformation,” he said. “Racial healing is something we desperately need. There’s a lot of growth that we need to accomplish there.”

Ainka Jackson, executive director for the Selma Center for Nonviolence, said there are a number of ways the grant will be used to help with racial healing in Selma.

Some of the examples she discussed Friday were community meetings and dialogues, blogs, radio programs and other ways to get people talking about truth.

“In the end, we think we are better together, so this process was designed for us to all come together, discuss what our problems are and not dwell on the problems, but what are the solutions that we can do to heal and transform our society,” Jackson said.

Other organizations are also eligible for getting some of the grant money to put programs in place to help with the others.

While money is not the direct answer to help fix society’s problems, Lucky, Jackson and Turner said education is, and it takes money to educate.

“To do the work of racial healing and transformation and truth, it takes funds to be able to do those things and do them well, and to the extent that we want to do them, which is to the extent where it has long lasting effects,” Jackson said.

“We’re in this for the long haul, and we hope the community is as well.”