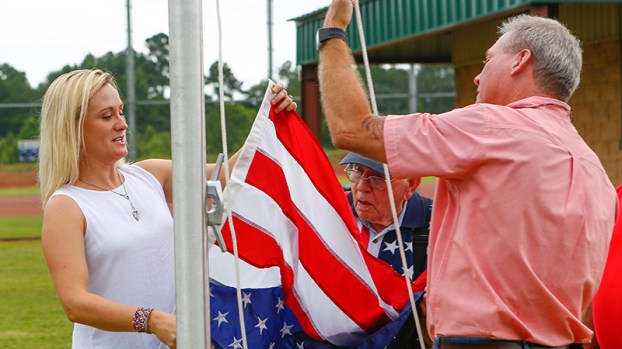 Despite the rain and all of the Valley Grande youth games being canceled Thursday night, a ceremony continued dedicating an American flag and flagpole at the Park and Recreation Center.

WoodmenLife Insurance Company, formally Woodmen of the World, has dedicated numerous flagpoles and flags to organizations across the country. And the local Selma Chapter 3 is no exception.

Pruitt said it’s essential for the company to give back to their local communities.

“We believe that the best way to promote the idea that made our country great is to make our flag a constant visible reminder of the sacrifice of those before us,” Pruitt said. “We acknowledge their commitment and honor their courage.”

Pruitt said it was special to have the dedication ceremony right before July 4 and to remind people about the flag.

“Patriotism is at the very core of WoodmenLife,” she said.

“It is the fabric that makes us who we are.”

Valley Grande Mayor Matt Dobbs said he had never been to a flag dedication ceremony before, but he was glad that he had the opportunity to attend one Thursday night.

“It was pretty moving,” Dobbs said. “I have not served in the military before, and because of that, I do not have the experience with the flag that others do. But just to encounter it was very moving.”

Dobbs said he felt like it was an appropriate time to dedicate the flag, and he was proud to be there and honor those that have fought for the flag.

Dobbs thanked WoodmenLife for their service to the community and for the new flagpole and flag.

“I am extremely grateful,” Dobbs said. “Without them, we wouldn’t have any of the flags or flagpoles that we have.”

Pruitt also said dedicating the flag was their way of saying thank you to the men and women who have sacrificed so much for the country.

“We also want to dedicate this flagpole and flag, not only to those that have sacrificed their lives, but also to our armed forces serving in combat today, along with the men and women of this community who risk their lives daily to keep us safe,” Pruitt said.

The Selma Police Athletic League showed off some of the city’s history Wednesday to a fellow league visiting from Florida.... read more