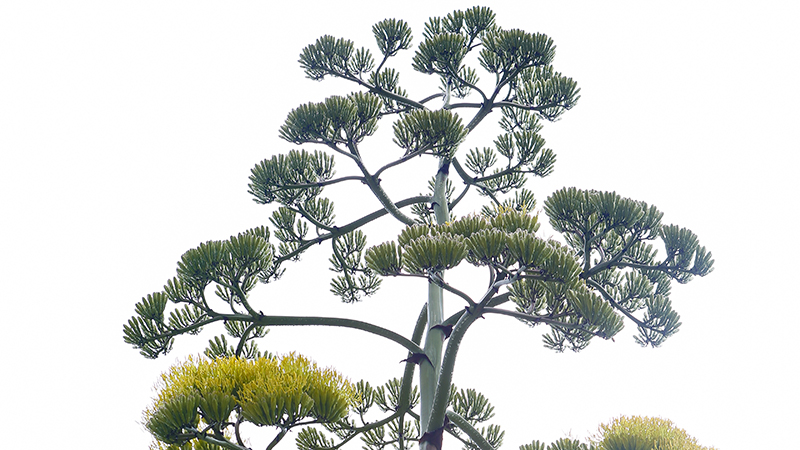 Gaylen Denson’s century cactus has bloomed. He estimates the plant to be 32 feet tall as of this week.

After a decade of anticipation and waiting, Gaylen Denson’s Agave Cactus, better known as the century plant, has finally bloomed. 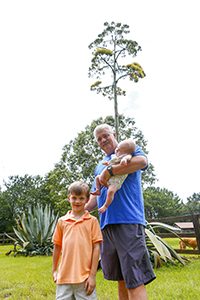 Gaylen Denson poses for a photo in front of his century cactus with his two grandsons, Briar Denson and Thorn Ballard.

“It’s pretty exciting to see it bloom, especially after the anticipation,” Denson said. “It’s been here so many years now.”

Denson got the cactus from his aunt Geraldine Autrey 10 years ago after it outgrew her yard.

“I got it from my aunt in Louisiana. She brought it over a little over 10 years ago,” Denson said. “She had planted it too close to her porch, and it started growing, and it started pushing on her porch, so she had to get rid of it.”

His aunt had the plant for about 10 years as well before giving it to Denson.

“We’ve been watching for years because they say it’s a 100-year cactus, but from all indication, we’ve ever heard, is it takes somewhere between 20 and 50 years [to bloom],” Denson said.

Denson said he went to Thomasville a few year ago because there were three blooming there, but that’s all he had ever seen in person. Those three had been on their property for 40 years.

“We were leaving out one morning and the stalk was probably already at 8 feet, and we hadn’t even noticed. For that first couple of weeks, it grew almost a foot every day,” he said. “We would go and measure every day.”

Denson is a seventh and eighth-grade math teacher at Martin Middle School and is also over the robotics program.

Using his mathematical skills, he estimates the stalk to be more than 32 feet now. Before school was let out for summer, Denson had his students to calculate the height of the stalk as it grew.

“At school, we were doing lessons on trigonometry so I started doing angle stuff on it and taking it to school, and they had to do the figures for it,” Denson said.

Denson said he first noticed the stalk growing in early April, and by then it was already 8 feet tall.

“We’ve been waiting a long time. We’ve been excited about it trying to see if it was going to bloom,” Denson said. “We’re going to sell our house before long, and we were hoping we would get to see it bloom before we moved.”

The cactus blooms one time in its life and dies after it blooms.

“It’s a little crazy,” Denson said. “It’ll be different looking out there and seeing nothing there and starting over with it.”