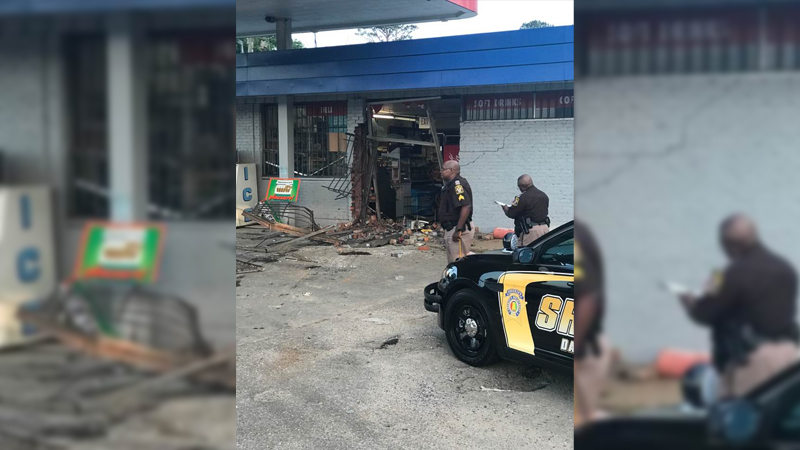 This photo of the Z-Tec General Store in Safford was shared by hundreds of people on Facebook Wednesday.

A Dallas County business suffered thousands of dollars worth of damage Wednesday morning after a truck smashed through the front of the store and stole an ATM.

Captain Mike Granthum with the Dallas County Sheriff’s Department said Z-Tec General Store in Safford was broken into sometime between closing Tuesday night around 8 p.m. and 4:30 a.m. Wednesday morning when an employee arrived to open up for the day.

“When the clerk came in to open, she noticed that the whole front of the store was collapsed like something had been driven through it,” Granthum said. “When Sgt. [Jonathan] Cole got there and started investigating, he realized a vehicle was used to go through the store.”

Granthum said a chain or rope was then tied to an ATM just inside the doorway and pulled out using the truck.

“Once they removed the ATM machine, they took it across the road, set it up against a tree and rammed it continuously until they got the ATM open,” Granthum said. “This was a big truck that had a lift on the back ­­– a real heavy duty truck.”

Surveillance video from the store is being retrieved to send to the Alabama Department of Forensic Science. Granthum said the department is waiting to hear back from the ATM company about how much money was inside the machine.

“There’s usually not a whole lot of money in those machines. To me it would be a lot of money, but it’s not like an ATM at a bank,” he said. “It’s not like tens of thousands of dollars in there.”

Granthum said investigators were also able to recover some unidentified evidence that could help find who is responsible.

“There’s some possible evidence that was left at the scene and possibly in the truck,” Granthum said. “That’s being gathered and will be sent in for some analysis.”

Granthum said the department has investigated past crimes where vehicles were involved but none of them were quite like this.

“We’ve seen where [criminals] would use vehicles to actually hook up to burglar bars and snatch the bars off, but actually ramming through is something like you’d see on TV. You never see that kind of stuff in a small town. It’s something you don’t see every day. You see it in the movies and on TV and stuff.”

Granthum estimated tens of thousands of dollars worth of damage was done to the store, which he said is much more than the amount of money stolen from inside the ATM.

“They were actually in the store with the truck. They didn’t use it just to breach the concrete wall or the glass. They actually drove all the way up to the counter,” he said. “It demolished that store.”

Dushyant Patel, who has owned the store for nine years, said he is working to get the store reopened, but it will take some time to make repairs.

“We’re working on it right now building the wall back on and a putting in a temporary door,” Patel said Wednesday afternoon.

Patel said damage to the store should be covered by insurance.

A similar incident happened at a store in Lowndes County during the same time frame, where a vehicle was used to smash open the front of a store. While it is unclear at this point if they are connected, Granthum said it seems like more than just a coincidence.

“We don’t think it’s the same truck, but we’re not sure if it’s the same people,” he said. “There’s a lot of resemblance to the way the crime was done. They were done both the same way and basically around the same time.”

Granthum said the person or people responsible will be charged with burglary and criminal mischief.