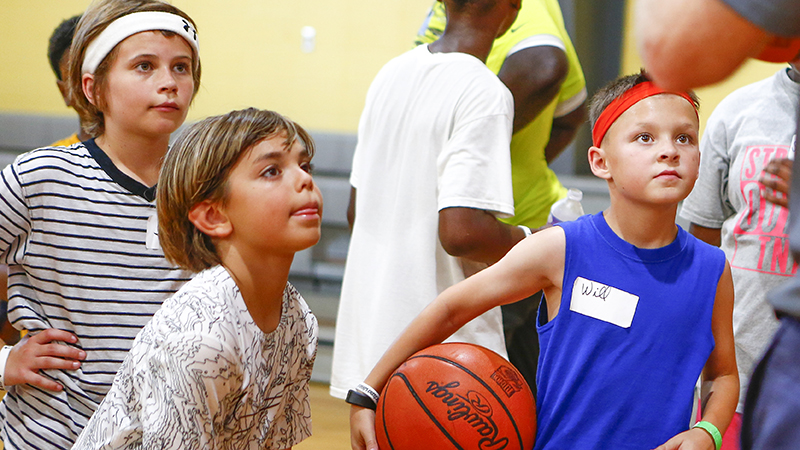 Children ages 6-18 took part in All In Sports Outreach basketball camp Monday and Tuesday at the YMCA of Selma and Dallas County.

The sound of dozens of basketballs bouncing and tennis shoes squeaking echoed through the YMCA Tuesday for the second day of All In Sports Outreach’s annual basketball camp.

Children ages 6-18 were learning drills and playing games against one another.

But the camp isn’t just about getting better at basketball, it’s about learning life lessons and learning about Jesus Christ.

“It’s just a way to use something that’s really fun to build encouragement and hopefully help build faith in these young guys and girls just to bring a little hope and point them in the right direction,” said Bob Frazer, after just dismissing camp for the day.

All In One Sports Outreach combines sports with faith.

“Sports is just a natural outlet to encourage people. Kids want encouragement, especially in the summertime when they want something to do. We’ve done other stuff, but it’s just a great way,” Frazer said. “Sports are pretty empty if you don’t learn anything from them. Sports so often mirror the ups and downs of life in different ways, so it really brings a lot of ways to teach through life lessons.”

Weston Mason, who serves as treasurer for the nonprofit, is one of the many people helping out with the camp this week.

“I’ve always had a passion for sports and stuff like that, so we started doing these camps, and that’s how I got involved with helping with these camps as much as possible,” he said. “I’m always used to being in an office and stuff, so being out here playing with these kids and teaching them stuff hopefully they’ll use later on in life has been a lot of fun.”

Mason said he hopes the kids get better at basketball but also learn about God.

“I just hope that they one, become better basketball players. We’re obviously not trying to coach them into the NBA or anything like that, but we just want them to know about God, know who God is and that God loves them and that there is a purpose for their lives,” he said. “They may not realize it now, but hopefully later on in life whether it’s the day after the camps end of whether it’s two or three years from now, they understand we’re just here to love on them.”

The basketball camp was also going on over at George Washington Carver Homes. Wednesday marks the start of the football part of the camp, which will be at Southside High School from 9 a.m. until noon. It’s for kids ages 6-18, and it is free. The football camp will last through June 29.