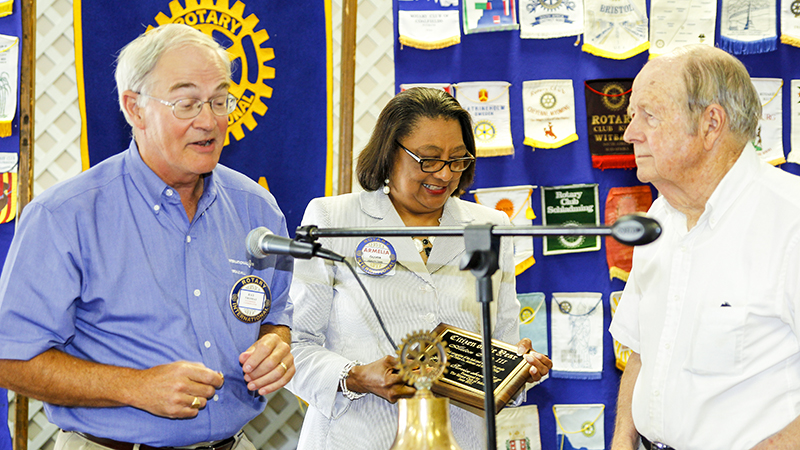 Alston Fitts (right) was named the Selma Rotary Club’s s Citizen of the Year during a program Monday. Fitts, a Rotarian himself, is shown with club member Ray Thomas and club president Armelia Oliver.

Selma historian Alston Fitts made some history of his own Monday.

Fitts was named the Selma Rotary Club’s Citizen of the Year during a program Monday at Church Street United Methodist Church’s Windham Hall.

Fitts, a longtime Rotary Club member himself, was presented the award by attorney Bill Gamble, club member Ray Thomas and club president Armelia Oliver while surrounded by his family, friends and fellow club members in the audience.

He taught English at Northwestern University before he started his path back to Alabama and eventually to Selma.

In 1977, the Fathers of St. Edmund hired Fitts to work in marketing and community relations. He’s served on several local boards including One Selma and the Old Depot Museum. He’s also taught history at Wallace Community College Selma.

But he’s perhaps best known for his extensive knowledge of Selma history, which has resulted in two books.

The first, “Selma: Queen City of the Blackbelt, published in 1989. The UA Press published his second work, “Selma: A Bicentennial History” last year.

“I’ve had the pleasure of reading it. I just want to recommend it strongly to you. If you want to know about Selma and all its glory and all its warts, read Alston’s book,” Gamble said. “It’s just a magnificent history.”

Fitts said he became interested in telling the complete history of Selma.

“Everyone knew the basics, the Battle of Selma and the second Battle of Selma, or rather the incident at the Edmund Pettus Bridge,” Fitts said. “But the rest of the story. The good stuff, actually, I wanted to know, and I’ve been digging it up ever since.”

Gamble said Fitts was an obvious choice for Rotary’s Citizen of the Year.

“The board and members are looking for people who exemplify the ‘service above self’ motto of the Rotary Club. We are also looking for somebody who really truly loves Selma, Alabama, and considers it home and considers it a place where we can accomplish wonderful and great things,” Gamble said. “Alston Fitts is certainly no exception to that.