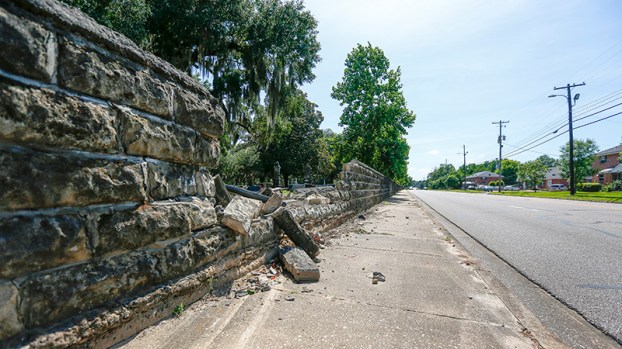 A driver lost control of their vehicle and struck the wall around Old Live Oak Cemetery last Wednesday morning.

The brick wall that surrounds Old Live Oak Cemetery has taken its fair share of hits over the years, including its most recent one last week.

John Coon, secretary of the city of Selma’s Cemetery Department, said a vehicle crashed into the cemetery wall on Dallas Avenue last Wednesday morning around 3:37 a.m., according to an accident report.

Coon said the vehicle, which was a Chevrolet Equinox, was still on the scene when the Selma Police Department responded. The report states the vehicle was traveling west on Dallas Avenue when the driver lost control of the vehicle and crashed.

The report states speed and road conditions played a factor in the accident. The speed limit in the section of road is 35 miles per hour. The place where the Equinox crashed into the wall is near Young Street just across from Valley Creek Homes. No cemetery plots appear to be damaged from the crash, but the wall is.

“I’ve been here seven years, and it’s happened probably once a year,” Coon said. “We might have missed one or two years, but I know five times for sure in the last seven years from memory.”

When a vehicle crashes into the wall, Coon says a police report is made and filed in the city clerk’s office. Coon said the repairs to the wall, which depend on the amount of damage, are paid for by the insurance company of the driver. The repair cost in August 2016 was $2,000, and in March 2015 repairs cost $2,500. According to a Times-Journal report from 2014, the wall was hit at least four times that year.

When the bricks themselves are broken, Coon said the department can get bricks from another wall to use to patch the Dallas Avenue wall.

“There’s not anywhere that makes it that we’re aware of,” Coon said. “It’s hard to replace it.”

Coon said the same bricks used to be found at old houses that were torn down in Selma, but those have not been easy to come by lately. If the wall continues to be hit, the department could run out of bricks to repair it with.

“We hate to think that, but it could get to that,” Coon said.

Once the claim is made, and the insurance companies settle, the repairs will be made. In the past, repairs have only taken a few days to complete.

By Mary Stewart | The Selma Times-Journal R’ryanna DeVille was offered the opportunity of a lifetime, and she took it.... read more