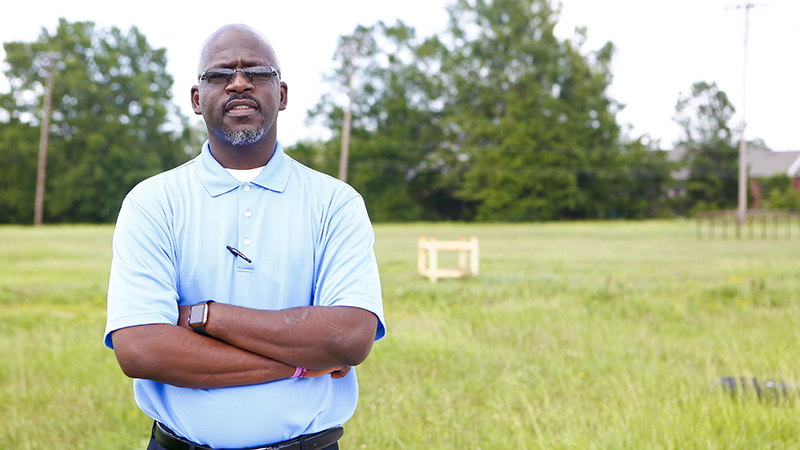 His hiring was made official Monday night. Raymond grew up in Mobile in a single-parent home. He attended Leflore High School, where he was a standout quarterback. The obstacle of growing up in a single-parent household caused Raymond to seek more out of life with his athletic ability.

“I saw all of the sports that I played as a way to go somewhere in life,” Raymond said. “Without the football scholarship that I received, I probably would have never attended college.”

Alabama A&M University offered him a football scholarship, and there he received a degree in health and physical education. His time in college opened his eyes to what he could do in the world of coaching.

“We would visit different boys and girls clubs and children’s hospitals, and I developed a love for kids,” Raymond said. “I was also looking at what my coaches were doing, and I started to admire them.”

His coaching career would soon kick off in 1994 at Dallas County High School. He served as the Hornests offensive coordinator for one year before accepting a job as an assistant coach with Keith High School. He spent four years with the Bears.

Raymond then decided to take his career to the middle school level and serve as a head coach for Tipton Middle School. His next stop was head coach at Southside High School for eight years, when he led to Panthers to two trips to the AHSAA playoffs. He led them to the second round in 2003.

His former high school, Leflore, was the next stop for Raymond. There, he led the Rattlers to three playoff runs, including a 2009 playoff run that ended in the third round against eventual state champs Demopolis. His last stop was Sumter County, where he served as a head coach for one season.

Selma High ended last year with a 1-9 record. Raymond hopes to build off what the team did well on last year and hopefully form a cohesive unit.

“My goal is to have a disciplined team that is together,” Raymond said. “We will have success in next year’s season that may not come in wins but in achievements as a team.”

All of Selma’s High assistant football coaches are expected to return this upcoming season. Raymond is interested in bringing in people from the community to help out with coaching duties.

“We have an open door policy, and we are interested in working with anybody in the community that wants to contribute, as long as it is understood that is not about the adults, but the kids,” Raymond said.

Raymond’s late hire puts his team in a bit of a disadvantage. He has been in contact with several players encouraging them to attend individual camps. Selma High kicks off their 2017-2018 football season against their biggest rival and Raymond’s former team Southside.