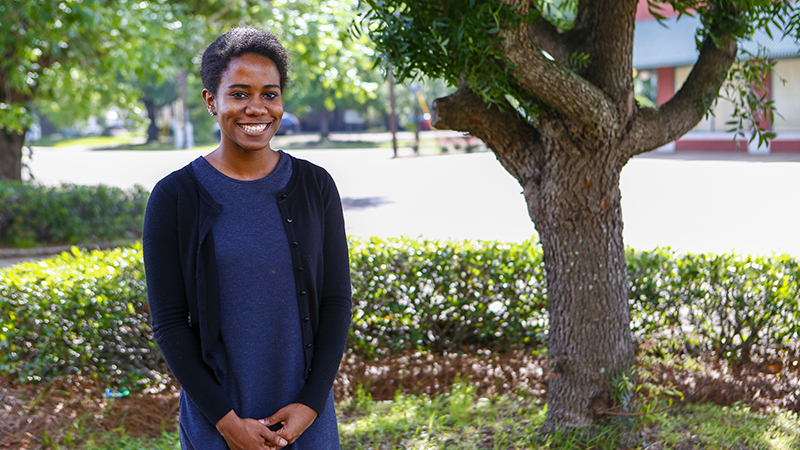 Vel Lewis has joined the Selma and Dallas County Chamber of Commerce as interim destination and marketing coordinator.

The Selma and Dallas County Chamber of Commerce is welcoming a new member to the team.

“I was looking for a way to get involved in Alabama and the state using my degree,” Lewis said. “I heard Landon was leaving, and he told me about the opportunity to come here and Selma has always been something I’ve been interested in.”

Lewis is a Birmingham native and a 2016 graduate of the University of Alabama, where she studied public relations and political science. After spending a year teaching English in France, Lewis returned to Alabama to look for a position where she could use her education.

“I was really excited about the opportunity and coming here. I’ve always been interested in the Black Belt and economic development and also tourism to bring people to Alabama to show them what we offer,” Lewis said. “I’m using what I’ve learned to continue the work that Landon was doing.”

Lewis said she hopes to continue the work of Nichols and even add a little of her own ideas to the mix.

“Landon did such good work while he was here, and I hope I can live up to what he did. He really transformed the image and the brand of the Chamber and really made an impact,” Lewis said. “I’m really excited to continue that and hopefully I can also leave a mark as well.”

Lewis will be in the interim position through September, when the Chamber hopes to hire a full-time coordinator.

“I’m really excited to be in Selma and I’m looking forward to these next few months and potentially longer,” Lewis said. “Three months is really short, so I’m hoping that I can start some things and maybe hopefully see them finished.”

Although Lewis isn’t from Selma, she’s always had an interest in the area and even has Selma ties.

“I have Selma roots, my grandparents are from Selma, and also with my interest in the Black Belt, it was just a really good fit for me,” she said.

“I’ve been really interested and excited to go explore a little bit more and go to the different museums and the Selma Interpretive Center and maybe even do some walking to see more of the city.”