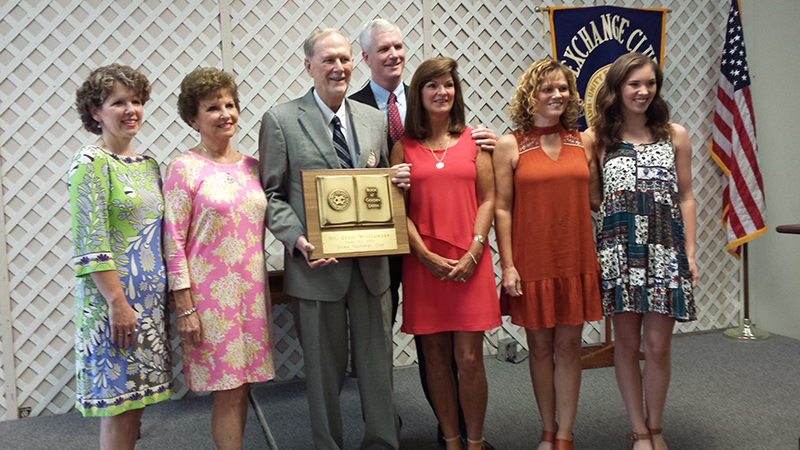 Cecil Williamson was presented the Exchange Club’s 48th Book of Golden Deeds awards during a program earlier this week.

The award is given to a person who has been quietly serving the community for a number of years.

“It’s a very distinguished award to be a recipient, and it just is an appreciation for their dedication and support of making a difference in our community,” said Sheryl Smedley, Exchange Club president-elect.

Smedley said that there is a lot of volunteer work involved in winning this award, and Williamson is no stranger to volunteering.

Williamson is involved in the United Way’s Doc in the Bus program, Habitat for Humanity’s Faith Village, city council service projects at the Pals Center and Brown YMCA and many other community service projects.

Williamson, who grew up in Lowndes County, attended Auburn University, where he received a bachelor’s degree in history.

He also earned his master of divinity degree from the Columbia Seminary and a doctorate degree in New Testament studies from Westminster Seminary in Philadelphia.

Williamson has served as a pastor for two different churches, most recently Crescent Hill Presbyterian Church, in Selma since receiving his degrees.

Williamson chooses to share his faith by serving the people around him and believes other should do the same.

“I just believe that that’s what believers should be doing — serving other people and serving the community,” he said.

His friend of 45 years, Travis Barnes, who had the honor of presenting Williamson at the luncheon, described him as a humble servant.

Williamson was a member of the Selma City Council for 16 years, and he served as president for the council from 2010-2012.

Barnes talked about the many deeds Williamson has done for the people of Selma without credit, and he said that his friend is absolutely deserving of this award.

“It’s a person who is just quietly going about doing things just because that’s who they are, and they desire to serve their community. That’s what the book of golden deeds is, and that’s why he is deserving because of the many things that he has done.”

Barnes also said that his friend did not enjoy the attention his secret good deeds were receiving.

“He was quite embarrassed over it yesterday, that I shared some of (his good deeds) because he’s so humble really,” he said.

Williamson said he was honored to have received the award.

“I was excited,” he said. “I was humbled, and I certainly appreciated it.”