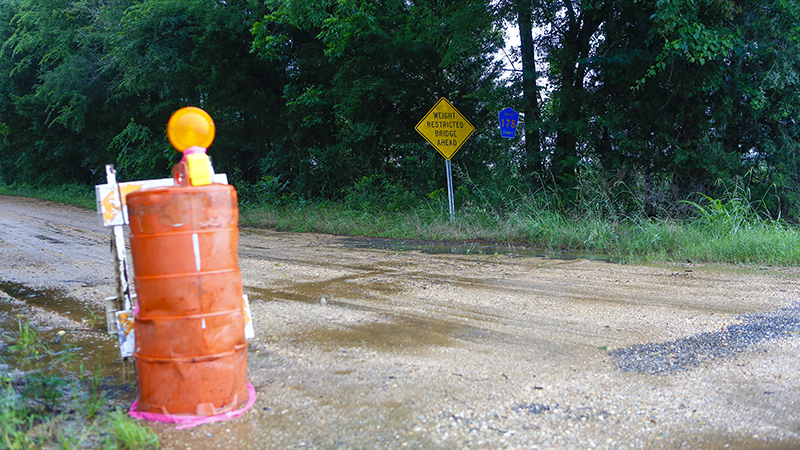 County Road 178 (shown above) near the Browns community and County Road 428 near Pleasant Hill were closed Thursday afternoon due to flash floods.

County Road 178 is near the Browns community, and 428 is near Pleasant Hill. Dallas County Engineer Coosa Jones said crews with the road and bridge department have put up barricades to stop people from going down those two roads.

“We’ve put up barricades and lights,” Jones said. “In previous rains we had a couple of pipes that washed out on both sites, and we’ve had the pipe on hand and ready to put them back in as soon as the rain slacks up.”

According to Jason Holmes, a meteorologist with the National Weather Service in Birmingham, Selma and Dallas County received 2.9 inches of rain as of 7 a.m. Thursday.

“We’ll continue to have bands from time to time tonight and tomorrow,” Holmes said. “The good news is late tomorrow night and into Saturday that system should finally start pulling away, and we should see lower rain chances.”

The EMA and National Weather Service urge people not to attempt to cross a flooded road.

“If anyone comes across water of unknown depth, it’s just best to turn around and don’t drown,” Holmes said. “It’s best because it doesn’t take much water to move a vehicle, and particularly at night it can be very treacherous. Don’t risk it.”

Holmes said the Alabama River has risen to 29 feet, which is one foot from caution stage.

It is expected to rise to nearly 35 feet Friday as rain continues. Flood level is 45 feet.

“It will be increasing to over 30 feet, and at 30 feet, pasture land south of Selma become flooded, so we do look to see some minor flooding there south of Selma,” Holmes said.

At noon Thursday Alabama Power reported around 620 homes without power in the Selma area. A company spokesperson said crews were working to get power restored.