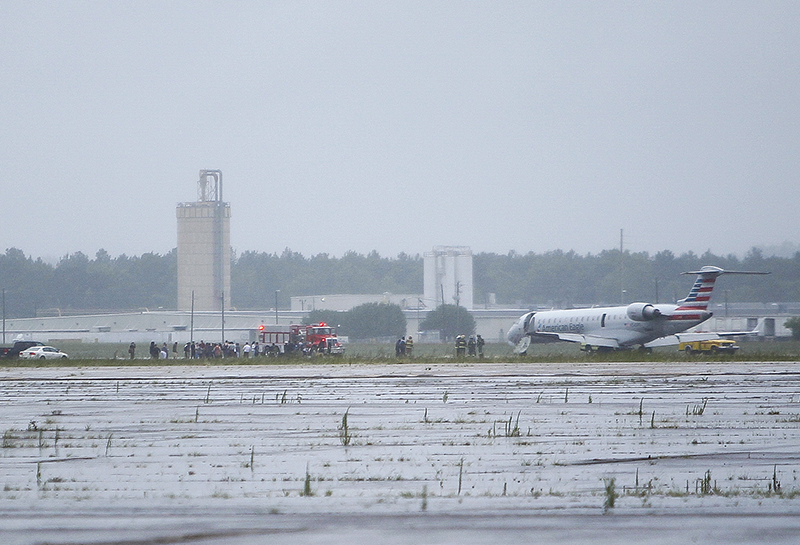 A passenger plane traveling from New Orleans to Washington, D.C. made an emergency landing Wednesday morning at Craig Field.

According to a statement from American Airlines, two people were transported to a local hospital for treatment of minor injuries. The plane landed because of a strong burning smell in the cockpit and cabin, according to the airline.

The emergency landing happened at about 11:40 a.m. There were 65 passengers and four crew members on board. 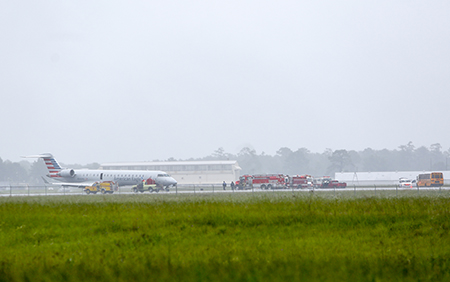 The emergency landing happened at about 11:45 a.m.

Menzo Driskell, Craig Field executive director, said the airport received a call from Montgomery alerting them about the emergency landing.

“My secretary came in and said there is a plane that has an emergency, they have an unresponsive passenger and there’s smoke on the plane. We alerted our volunteer fire department, and you can see the rest is kind of history,” he said. “They got the plane down, got it shut down and got the people off.”

Driskell said two passengers suffered what appeared to be minor injuries after climbing out onto one of the wings and jumping down onto the wet runway. Three passengers were evaluated by medical personnel and two were ultimately transported to the hospital.

The passengers were safely evacuated shortly after landing and were taken from the runway to a hangar to get out of Wednesday’s steady rain.

“They were standing in the rain, but we opened up [this hangar] and got them in here. A lot of my guys pitched in with that,” Driskell said.

Selma Fire and Rescue and multiple ambulances responded to the scene. Dallas County Schools buses were used to transport passengers from the plane to a hangar.

“They were like you’d expect,” Driskell said. “They were scared and disoriented. The ones I took [to the hangar], it was like they didn’t know where they were. There was one gal actually from Alabama.”

The flight is operated by PSA Airlines, which flies under the American Eagle brand, for American Airlines and left New Orleans at 10:52 a.m. and was scheduled to arrive in D.C. at 2:27 p.m. local time. The plane is a Bombardier CRJ700 jet.

“Our customer relations team will be reaching out to each of our customers to offer our apologies for what transpired,” said Ross Feinstein, spokesperson for the airline. “We’ll be offering some compensation of course as well.”

The plane is being inspected to determine what happened.

“Our maintenance team will evaluate the aircraft, and we will most likely ferry that aircraft out of there once the inspection is complete,” Feinstein said. “[The plane] will undergo an additional thorough inspection prior to being placed back in service. It’s preliminary to say when that will be, but of course the aircraft will be inspected by an aircraft maintenance team with PSA, which operated that flight.”

Driskell said there have been emergency situations at Craig Field before but nothing like Wednesday’s.

“Not on anything of a scale like this,” he said. “We’ve had a military plane break a landing gear off, but the crew was three [people] on that thing, and some things like that. We don’t get 100-passenger planes here very often.”