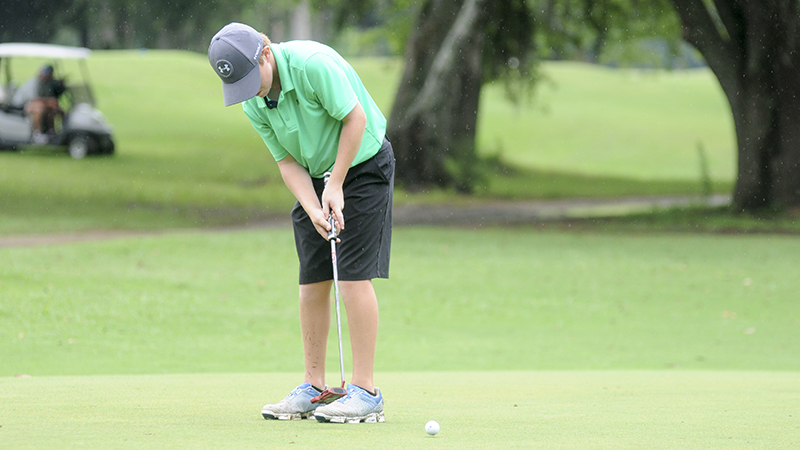 A steady rain poured down most of the day Tuesday, but that didn’t stop the first day of the 56th annual Bud Burns Dixie Junior Invitational.

Some of the state’s best boys and girls junior golfers tested their skills on the rain soaked course at the Selma County Club.

This year’s tournament field is made up 55 boys and 6 girls. Four boys from Selma are competing and one from Valley Grande. The field includes players from Alabama, Mississippi and Florida.

Burns said this is one of the best tournaments at the country club all year.

“It’s the highlight of my year golf tournament wise,” he said.

“I love the kids. That’s what I’m about – promoting the game and keeping kids playing. Now days, it’s extremely difficult. I can’t compete with girlfriends, pickup trucks and computers.”

Riley Thrasher from Trinity lead the boys’ championship division Tuesday with a score of 71. Anniston’s Jacob LeCroy and Luverne’s Gauge Cornelius are tied for second with a score of 73. Thomas Morris of Selma is in third with a 74.

“The rain was terrible. It ruined the whole round,” Morris said after finishing the round. “The rain just messed a lot of people up.”

Burns said the rain has had a big impact on players’ scores.

“The rain has been devastating on the kids’ scores. The scores are extremely high, of course because they’re playing the ball down,” he said. “Once the tournament starts I can’t change it because the conditions will be different for people who have already played it down.”

The tournament is schedule to continue Wednesday, but Burns said it will depend on the weather.

“We’ve got this tropical depression down south coming this way, and we’ve just had to keep playing. We couldn’t quit,” he said. “This might be the only round we get in looking at the weather for [Wednesday]. Hopefully we’ll get it all in. We’ll see.”