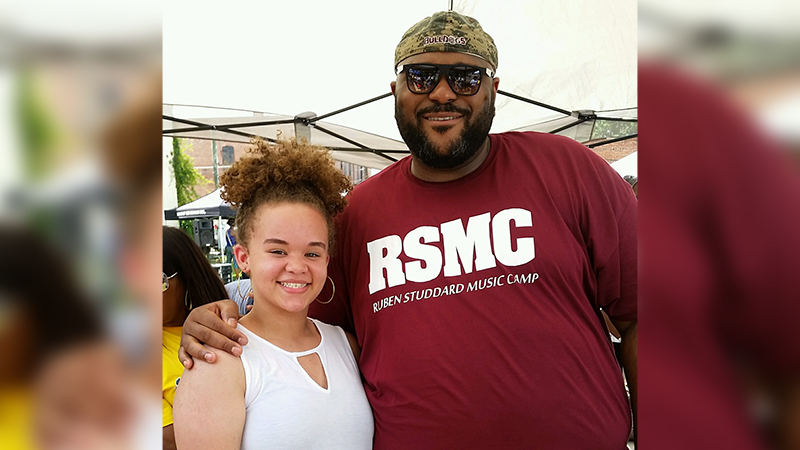 Kayleigh Scott, winner of the scholarship to the Ruben Studdard Music Camp, poses for a photo with Studdard Saturday at Jazz on the Grazz.

Eight aspiring musicians took the stage Saturday at the sixth annual Jazz on the Grazz to compete for a scholarship to the Ruben Studdard Music Camp in July.

Sitting at the judges table was the American Idol winner himself, Ruben Studdard.

Twelve-year-old Nelson Snow, a student at R.B. Hudson Middle School, was one of the eight to showcase their talents in front of a crowd at Phoenix Park. He waited anxiously underneath the tent for the competition to start with his snare drum under one arm and his drum sticks in hand.

Snow was first up to get the competition started. He set his drum up on stage and played a freestyle piece that featured drum rudiments, which are basic, fundamental drumming patterns.

Snow was the only act to play an instrument. The others that followed were vocalists.

“I usually sing in front of a whole bunch of people but today I was singing for Ruben Studdard, so it was really nerve racking,” he said after his performance. “The whole time in my mind I kept thinking I’m singing for an American Idol winner and a Grammy nominated guy, so it was really hard.”

Parrott said it was a great experience.

Kayleigh Scott, a 15-year-old incoming freshman at Selma High School, also performed for Studdard and the other judges.

“I’ve been singing since I was about 12. I sing at church, and I’m in the choir. My grandmother is a singer also, so she has helped me with working on my voice and stuff,” she said. “At first I was nervous practicing for the song because I’ve never sang for a famous person like this before, but once I got up there I just let it go. I think I did really well.”

And she did. With the participants lined up in front of the stage awaiting the results, she heard her name called as the winner of the scholarship to the camp.

“I don’t even know what to say,” she said with a smile. “I’m just speechless for real. I’m really excited about the camp. I’m ready.”

Before she found out she was the winner, she said it would mean a lot for her to get the scholarship.

“When I was younger I wanted to be famous, so being able to go to a camp and have somebody help me with my voice would mean a lot,” she said.

Studdard, who will be in town for two weeks in July for the camp, said he saw himself in the competitors that ranged in age from 12 to 18.

“It’s the reason why I do it because these kids are me. I was the person auditioning for stuff like this, so I’m glad I get the opportunity to do it,” he said. “It’s really amazing. I wish when I was growing up I had opportunities like this, so I try to provide them for the young people as much as I can.”

The camp will be at Concordia College Alabama from July 10-21. To apply, go online to www.rubenstuddardfoundation.org and click on the “Apply For Camp Today” button at the top of the page.