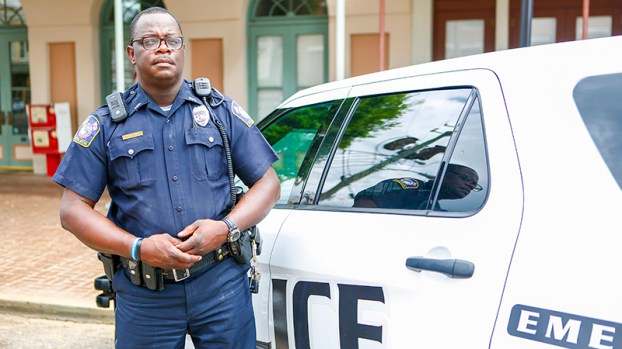 Ronald Jones has been with the Selma Police Department about 14 years.

For Jones, being a policeman is about taking the criminals off the streets and protecting the citizens of Selma.

“I enjoy helping others. It’s not always about the arrest, it’s about making the city safe,” Jones said. “That’s one of my main goals.”

Jones is a patrolman for the department, and although he worked as a detective for a while, he said he enjoys being able to ride the streets of Selma.

“I did work in the detective division … but I was asked to work as a patrolman and I’m starting to love it,” Jones said. “It’s a 24-hour work ethic. It’s always something to do. We just try to do our job and make it positive.”

Through his position, Jones meets a lot of people in the city, and he’s hoping to change their perception of police.

“Police have been labeled as the bad guy throughout the nation, but we try our best to get them to understand that we’re here for them. We’re here to protect the city,” Jones said.

“The more we get out that we’re the good guys, the better chance that we have to stop the violence here.”

Jones is originally from Selma and graduated from Selma High School and said he just wants to see the best for the city and its people.

“I don’t think I could make it without policing because my kids are here, my family, and I want to protect them because so much is happening that when I step in this uniform, it’s for the citizens, not just me and my family, for everybody,” Jones said. “Our job is hard. There’s nothing easy about policing, and that’s why I took on this job. Once I became a policeman, I felt 100 percent that I could make a difference in the community.”

By Luis Torres | The Selma Times-Journal As the weather gets hotter, parents and children have a place to cool down... read more