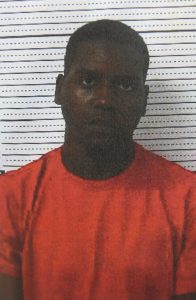 According to Lt. Tory Neely with the Selma Police Department, 21-year-old Markus Gloss has been charged with unlawful possession of a forged instrument. Gloss was booked into the Dallas County Jail on a $15,000 bond.

My’Keisha Brown, 26, has also been arrested for her alleged involvement. She was arrested on June 6 and charged with second-degree forgery. She was also booked into the Dallas County Jail on a $15,000 bond. Both of them are now out on bond.

Gloss, according to Selma Police Chief Spencer Collier, worked for the recreation department at one time.

The two are accused of getting a cardstock check from the city and using it to reproduce at least three fake checks.

“It appears to be computer generated forgeries of city checks based off of a city account. It appears to be high quality with the exception being they were absent of the water mark,” Collier said last week.

According to Collier, they were able to successfully cash two of the three checks at a package store.

A third attempt to cash another fake check was stopped when the clerk at the store would not accept it. Collier said the first two checks were worth around $500 each, and the third one that did not go through was written for $1,300.

A concern Collier had with the case was with the quality of the fake checks.

“I have concerns about the quality of the check that was used, which leads me to believe that the original copy came out of city property,” Collier said last week.

According to Neely, Gloss told investigators he received the check in the mail.

Collier said the checks were passable for the most part with the exception of the water marks on the back of them.

“When you go to copy it, even if you use a high [quality] copier or used a computer to redo it and reprint it, it is going to be difficult to get the perforated edge, but you’re definitely not going to get the water marks,” he said. “That’s built-in security.”

The police department is still investigating where the original check came from. The alleged forgery happened after Gloss was no longer employed with the city.

An employee at the package store Gloss and Brown allegedly cashed the checks at alerted the police to the case.

“After they were successful and returned to the same package store, at this point they became suspicious and notified us,” Collier said. “Through process of elimination at the city, we were able to identify where the original cardstock came from.”

Plea made in drug, bomb case