A 19-year-old Selma man is behind bars for allegedly putting a gun to someone’s head and stealing their truck early Monday morning. 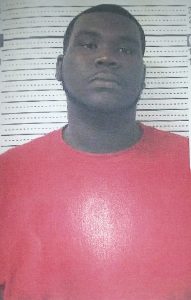 Lt. Tory Neely with the Criminal Investigations Division of the Selma Police Department said the truckjacking happened between 1-2 a.m. on the 1400 block of Lauderdale Street, which is behind St. Elizabeth Catholic Church and Tabernacle Baptist Church.

According to Neely, two people were riding down Lauderdale and stopped. That’s when Tyrone Fuller allegedly approached the vehicle on the driver’s side with a pistol pointed at the driver’s head.

“They were just riding and stopped, and when they stopped, he came up on them,” Neely said. “He stuck the gun to the driver’s head and made him get out of the vehicle.”

Neely said the victims recalled Fuller saying something to the effect of “this is going to be your last day” during the theft. Neely said Fuller also took the cell phones of the driver and passenger and left them stranded.

The responding officers spotted the truck less than an hour later on Highland Avenue.

“After they got through taking the report they spotted the truck about 20 to 30 minutes later,” Neely said. “Patrol officers [spotted] him up on Highland Avenue by the Selma Hotel. He jumped out of the vehicle and ran, and they apprehended him.”

Fuller was charged with first-degree theft of property, first-degree robbery, carrying a concealed weapon without a permit and resisting arrest. He was booked into the Dallas County Jail on bonds totaling $77,000.

Neely said Fuller didn’t have a criminal history when he looked him up in the court system, so he wasn’t sure what the motivation was.

Officers were able to recover the two cell phones, the truck and the gun Fuller allegedly used.

Neely said neither the driver nor the passenger were injured during the incident.

Jazz on the Grazz returns Saturday

By Mary Stewart | The Selma Times-Journal The sixth annual Jazz on the Grazz event is back to kick off... read more