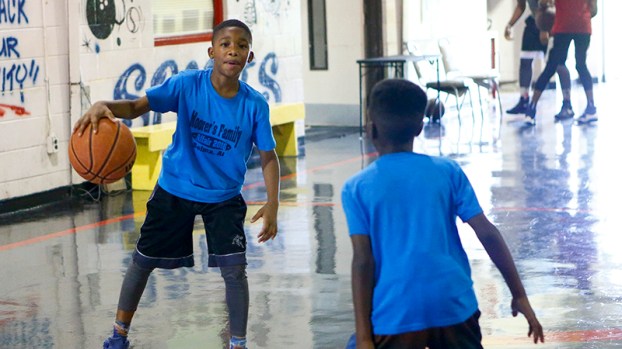 Jamarion Acoff dribbles a basketball during the first day of the Selma Police Athletic League academy.

By Thomas Scott | The Selma Times-Journal

The Selma Police Athletic League started its annual enrichment and basketball academy Monday for children looking for a safe place to learn and play this summer.

Despite a delayed start due to floor renovations, 18 children, ages six through 15, showed up on the first day to learn and compete.

Detective Dorothy Cowan has been the executive director for PAL for 15 years.

“We’re just trying to give them something to do during the day time while they’re out of school so they’ll be here instead of outside on the street,” Cowan said.

The morning starts with education and enrichment, and the games begin after lunch.The program runs out of the Robert E. Lunsford community building, where they have a full indoor court to play on.

The walls of the gymnasium are painted with encouraging messages, anti-crime and anti-drug related art work along with the Selma PAL Eagle. The kids learn basketball fundamentals and spend the day playing against each other in games of five on five, knockou, and more.

Jareione Melton, a 15 year old who has been playing for Dallas County for three years, has been coming to the PAL summer program for the last five years.

“It really taught me everything I know about basketball,” Melton said. “How to play, how to dribble, how to shoot. Everything.”

He keeps coming back because it “helps [him] stay out of trouble,” he said.

In addition to learning basketball, Cowan uses the morning to educate the children using the Gang Resistance Education and Training program.

The purpose of the GREAT program is to advise young people how to react when they find themselves in a situation they do not want to be in.

“It tells you how to react when someone approaches you about gangs, alcohol, drugs or  how to react to your peers when they try to get you to do something that you don’t want to do,” Cowan said.

PAL also gives children a chance to interact with local police officers. Cowan will bring in different officers to help teach the GREAT program so the children will become more familiar with them.

Being the hands on supervisor that she is, Cowan has earned the appreciation and respect of the kids in her program.

“I have a good relationship with detective Cowan,” Melton said. “ She looks out for me.”

While Cowan has made her own impact, she also has volunteer mentors to assist her with the kids. The mentoring program, sponsored by National PAL’s,  allows the kids to spend time with an adult on-site for at least an hour per week to talk about a range of topics such as school, home life or whatever questions they may have.

One of those mentors is Janice Hall, 68, who joined the program in December. Hall used to work in the police department and offered to volunteer after she retired last June.

In her role, she assists in teaching the kids “how to work and play together. That is the goal to have less bickering and more togetherness,” Hall said.

As the number of kids increases over the summer, Cowan continues to encourage more people to serve as mentors to the kids who will show up all summer long.

“Right now we have eight [mentors], and we’re still looking for some. We need more mentors to go to the kids,” Cowan said.

By Justin Smith | The Selma Times-Journal The Masonic Lodge Organization of Selma put on a golf tournament Saturday to... read more