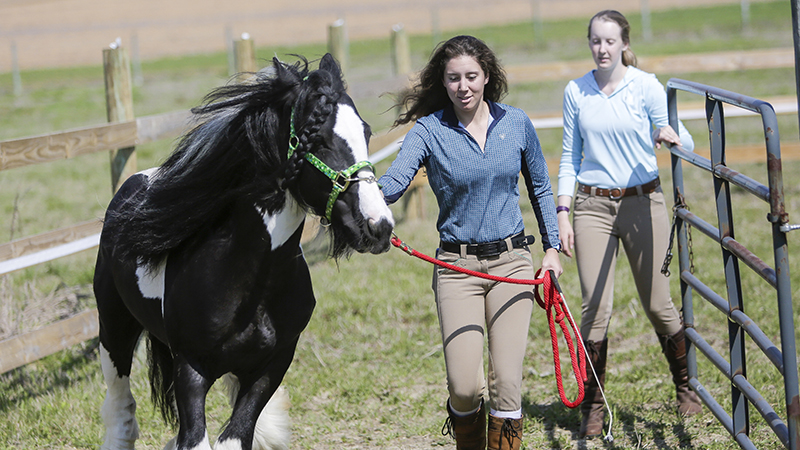 Joyce Christian may never find a unicorn, which she has always loved so much she named her Marion Junction farm “Unicorn Spirit,” but she may have come as close as possible with a rare horse breed from England.

Christian, a retired educator who spent decades working in Germany, relocated to Marion Junction about six months ago with her little known about Gypsy Vanner horses.

Originally from Greensboro in Hale County, Christian went to the University of Alabama and earned a degree in elementary education and a master’s in curriculum development and supervision. 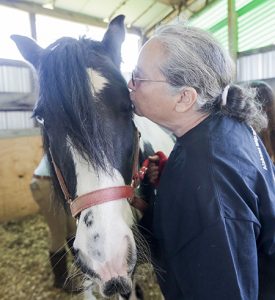 Joyce Christian kisses one of her Gypsy Vanner horses on her farm in Marion Junction.

She worked in Birmingham and Tuscaloosa before being hired by the Department of Defense to teach the dependents of Army and Air Force members in Germany, a country she called home for 23 years.

“I went there for just two years and fell in love with it and stayed,” Christian said.

While in Germany, she found another love, Gypsy Vanner horses.

“I loved horses all my life but could never own one of my own. My parents couldn’t afford one,” Christian said.

While overseas, Christian’s youngest daughter decided that she wanted to take up riding lessons.

“I was so excited that she expressed an interest in riding. I didn’t think I would ever get to be around horses again,” Christian said. “We went down to the riding school, and she turned out to be quite the natural.”

The family grew close to the riding instructor, who one day shared that he was preparing some special horses of his for a show team.

“We went back to this special barn and, well, that was the beginning of a change in my life,” Christian said. “It was the most beautiful horses I thought I had ever seen, and, yet, I couldn’t understand why it was the 1990s, and I hadn’t seen a horse like this before.”

As she started asking questions, Christian didn’t get many answers. Her daughter’s instructor couldn’t tell her much about the horse — other than they were bred by gypsies in England and called tinker horses.

Over time, the instructor would travel back and forth to England and bring back some more of these tinker horses, which varied in almost every trait.

However, on occasion, the instructor would bring back a beauty.

“Every now and then, he would bring in one of these horses that would literally take your breath away. When it moved, it looked like it was flying because of all the hair,” Christian said.

Those horses were set apart by their hair, feathering from the knee down to the front of the hooves, a broad chest, strong neck and sweet head. Christian said the horse looks as close to a unicorn as any she has ever seen. 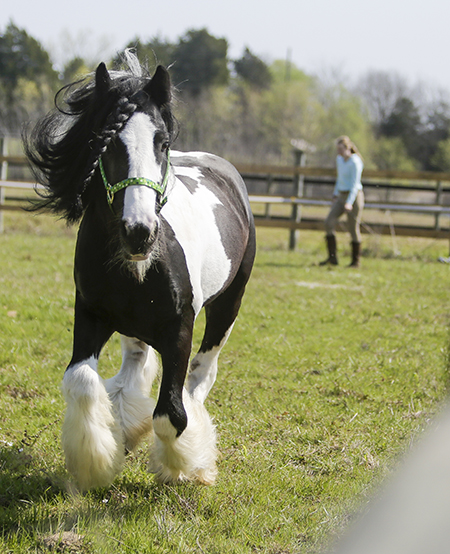 The Gypsy Vanner bred of horse traces its heritage back to gypsies in England.

However, finding information about the breed would prove difficult and lead Christian on a journey around the world.

“You couldn’t find anything from the gypsies because nothing had been written down. Anything you wanted to learn about them you had to learn orally, which was another fascinating piece,” Christian said.

She started with a search on her home computer, which was still in its infancy in the mid-1990s.

“I typed ‘horses from gypsies’ in the search box, and this beautiful farm in Ocala, Florida popped up,” Christian said.

The couple was Dennis and Cindy Thompson, which shared Christian’s love for the mysterious horses from England.

“When I started reading their story, I got so excited because they certainly done what I hoped somebody would do, which is go to England and trace the lineage of the horses that had all the traits and determine if a breed did indeed exist,” Christian said.

Christian learned that the Thompsons had traced one of the horse’s lineage through three different countries and that the horse was indeed its own breed, albeit an unrecognized and unnamed one.

“There was tremendous prejudice against the gypsy culture so the British and Irish refused to recognize the horse as a breed,” Christian said.

The Thompsons wanted to start a registry for the horse and over the course of a few years in the 1990s imported two stallions and 14 mares to their Florida farm.

Christian ended up buying two of the horses in Germany but also two from the Thompsons when she returned to the United States, introducing the breed to the whole northeastern part of the country.

“People were beginning to get interested in the horses. They are so unusual looking,” Christian said.

Christian also started writing about the breed to help further educate horse enthusiasts. She contributed several articles to national magazines, including Horse Illustrated, and other publications in the 2000s. 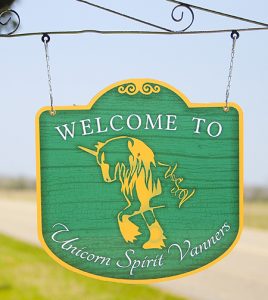 Christian retired from education in 2009 and worked with a couple in Louisiana on their farm before deciding to come back home to Alabama.

“I wanted to go back and find a little horse farm somewhere in Alabama and enjoy my animals,” Christian said.

Her goal is to continue to educate people about the breed and horses in general. Since moving to Marion Junction she has partnered with Judson College in Marion and has had two of the school’s equestrian students, Alex Huber and Shelia Palmer, work on her farm the past few months.

Christian found her farm in Marion Junction last summer and has been on site since November.

“It’s going to take a while to get everything going and doing the things we want to do here,” Christian said.

The Gypsy Vanner is bred for carriage driving (although the horses can also be ridden), and Christian said she would like to be able to do that in time.

“That’s what I do with them rather than ride them. They were actually bred to pull caravans,” Christian said. “Gypsy for the people that breed them and Vanner is short for caravan.”

She said the horses can also be used to help people overcome challenges.

“We are finding out there are lots of needs for equine therapy,” Christian said, adding that there is a need for more than physical therapy. “I’ve done a lot of work with autistic children. Horses are really great motivators and tools to teach a child.”