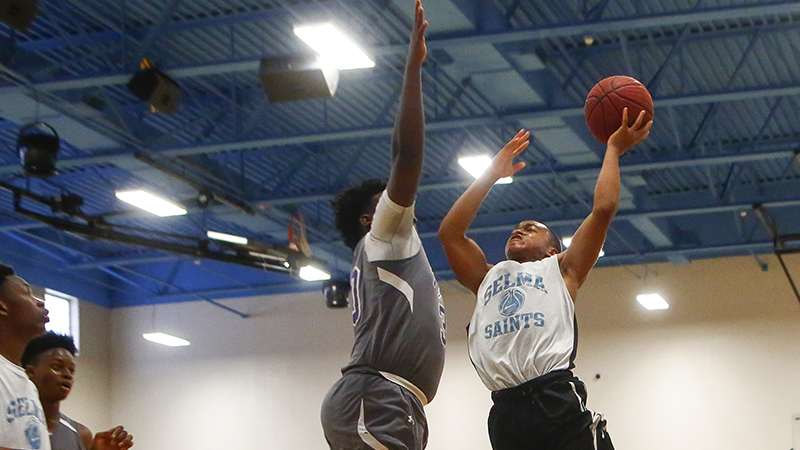 James “3J” Anderson puts up a left-handed floater in a game against Minor. The Saints hosted its annual Slam Team Play Date on Thursday.

Boys basketball teams from across the state came to Selma to participate in Thursday’s Slam Team Play Date.

All local teams, including Selma, Dallas County, Southside and Keith participated in the play date, which saw each team play three games. Each game consisted of two 20 minute halves.

Selma High School is focused on bouncing back from last season, which ended in a loss to Wetumpka in the sub-regional.

The Saints started the day off with close wins against Keith High and Minor High School.

“I want my guys to gain some exposure from this play date,” Selma High coach Ronald Lane said. “A lot of the guys didn’t play varsity last year, and this could help them get adjusted to the game’s speed.”

In addition to the local schools, Lee-Montgomery, Robert. C Hatch-Uniontown, Hoover, Parks Crossing-Montgomery, Elmore County were among the 20 teams that participated.

Keith High School is coming off a season that ended with a loss to Robert C. Hatch in the first round of the area tournament. The Bears are also focused on using the play date as the opportunity to get a jump on next season and build some togetherness.

“This is a great opportunity to get the first look at some of our new guys,” Keith coach Tommy Tisdale said. “We get a snapshot of what we can possibly be this season.”

Southside is coming off a season where they also lost in the first round of the area tournament. Their day included a win over Hale County.

“I used this play date to improve on some of my younger guys since all of my boys were not present,” Southside head coach Leonard Jones said. “Our last season was all about discipline, and we hope to continue that next season.”