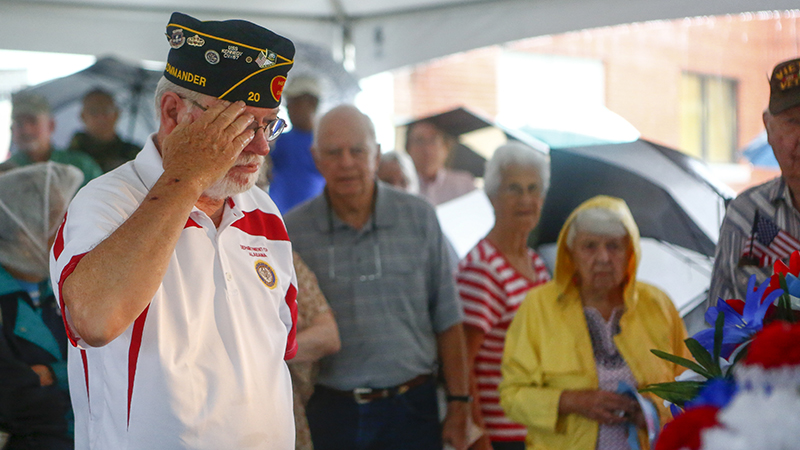 Charles Friday, post commander at the American Legion Thomas R. Mackin Post 20, salutes after he placed a wreath in honor of fallen soldiers.

As a crowd gathered in front of Memorial Stadium Monday morning to honor fallen soldiers, the sounds of a battlefield rumbled the ground as a thunderstorm passed over. The thunder clapped, the lightning flashed and a heavy rain poured down, but the ceremony went on.

“This is all our veterans crying up there, so y’all thank them tonight,” said Rod Stone, quarter master of Veterans of Foreign Wars Post 3016 in Selma.

Stone was introduced as the guest speaker, but he spoke for those soldiers that couldn’t be there Monday because they paid the ultimate sacrifice.

“I am not the guest speaker. The guest speaker should be sitting right there,” Stone said as he pointed to an empty chair sitting right beside the podium. “I’m speaking for them because you see, they have already given all. Their names are written on these walls, on these monuments, on these crosses around the world. Today is their day.”

While many people spend Memorial Day cooking out, going to the beach or shopping, many choose to spend it honoring the brave men and women of the United States military that died in combat. That’s why the VFW Post 3016 put Monday’s program together.

“It is up to us, war veterans and the veterans that remain, to remind America of the true reason for today,” Stone said. “It’s a day set aside by our government to honor and remember American military personnel who died in the service of their country. They all died in combat or as a result of combat sustained in battle. Some of those wounds take effect immediately, and some take years to take their toll.”

According to the U.S. Department of Veterans Affairs, 651,031 soldiers have died in battle, and another 308,800 have died in theater.

During the ceremony, veterans in attendance were asked to salute their fallen comrades. Willis Chappell, a Vietnam veteran that was stationed at Dover Air Force Base with the First Army Escort Detachment, was one of those that saluted the fallen. He joined the Army in 1958.

“For two years all I did was take soldiers home that got killed in Vietnam,” he said. “Every day during that time I was taking soldiers to a different place. This is just a heartfelt revisiting of what I used to do.”

Chappell said Monday’s ceremony was a time to reflect and honor those soldiers.

Frank Calloway, a World War II Navy veteran, was also among the men that saluted the fallen.

“You can’t do anything but remember and appreciate what they done,” Calloway said. “The reason we’re in the good condition we’re in today is because of them.”

Flowers were placed on the seat reserved for those soldiers that sacrificed their lives, and “Taps” was played by played by Jesse Sanchez.