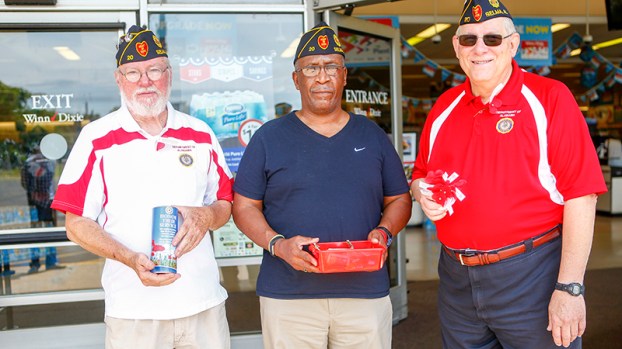 Charlie Friday, Joseph Pritchett and John Coon pose for a photo outside of Winn Dixie Saturday during the Post’s Buddy Poppy drive.

The American Legion Post 20 of Selma participated in a Buddy Poppy Drive  Saturday to commemorate Memorial Day and remember the soldiers that have made the ultimate sacrifice in the name of freedom. They did this by passing out red poppy flowers to Winn-Dixie shoppers as they passed by.

The red poppy flower symbolizes the blood of the soldiers that lost their lives in battle while serving their country. Donations were also accepted.

“Our goal is to get out as many poppy flowers as possible,” said Post Commander Charlie Friday. “It is very important to remember all the soldiers that make it possible for us to be free.”

All of the donations that were collected are going to the American Legion’s national office. The national office will then donate the money to disabled veterans in hospitals across the world.

The American Legion Selma chapter did not begin their busy Saturday of celebration at Winn-Dixie nor did they end it there. Their morning began with the placement of more than 1,800 American flags by the graves of fallen soldiers at New Live Oak Cemetery.

They continued their day with a stop by Cedar Hill Assisted Living, a local nursing home, to give out red poppy flowers to residents and offer a listening ear. The chapter has shown a desire to reach out to more nursing homes in the future and organize similar events.

Buddy Poppy drives happen many different times all year round across the country. They are usually put on close to Memorial Day, Veterans Day and other military holidays.

The red poppy flower has been used in many memorials since 1921. It was inspired by the World War I poem “In Flanders Fields.” The American Legion was the first to adopt it.

Since then, military groups across the world including Australia, the United Kingdom, Canada, New Zealand and the British Empire have taken part in the red poppy tradition.

“We hope that everyone that receives a red poppy flower takes it serious,” Friday said. “The sacrifices that military men and women make, make it possible for us to live every day life.”

The American Legion will also host a Memorial Day program at Bloch Park on Monday.

First Baptist Church Selma was founded May 29, 1842, and has carried on strong for the last 175 years. Thirty... read more