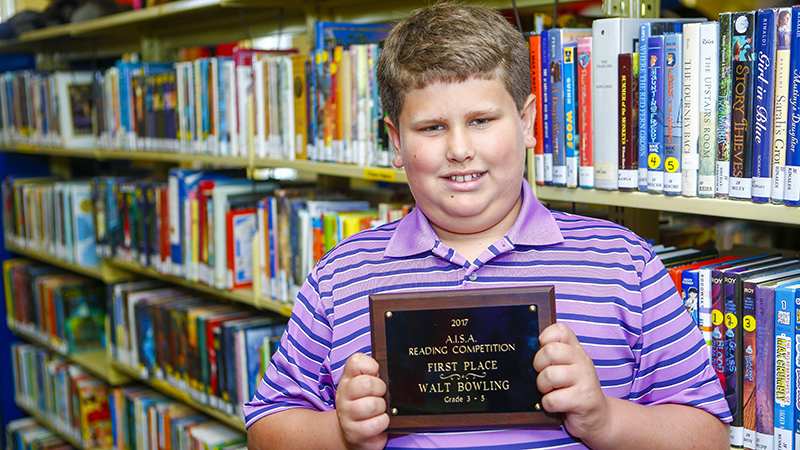 Walt Bowline poses for a photo in the Selma and Dallas County Public Library with a plaque for being the number one reader in the AISA.

If 9-year-old Walt Bowline could be at any place in the world, it would be at the Selma and Dallas County Public Library.

He visits at least once a week, sometimes twice, and takes home bags of books that he will read over the course of a week. To many people, it may seem like a lot, but to him, it’s completely normal.

Bowline said he can read pretty fast and recently set a new record for himself.

He also said he prefers to read printed books versus using technology.

“I like reading print,” Bowline said. “If you read on the iPad, … you don’t get to flip pages.”

Bowline just finished third grade at Morgan Academy, where he received an award for having the most Accelerated Reader points from second through sixth grade. Morgan’s librarian, Harriett Teel, said excellent readers had AR scores of 200 and 300 points, but Bowline had an impressive 1176.1 points.

“In second grade, … they immediately jump from picture books to chapter books. He took a huge leap, he didn’t jump, he leaped into series and stuff. He out read what we have,” Teel said. “He has a passion.”

Bowline also won the third through fifth grade Alabama Independent School Association’s reading contest by reading the most pages out of any student in the state in his division.

Morgan had 11 students who participated with a total of 127,149 pages being read, and 45,726 of those were read solely by Bowline.

His parents, Carl and Julie, are very supportive of his reading and when Carl found out that Walt had won the AISA competition, he couldn’t even wait until awards day to tell him.

“I love it. That’s why I told him, I couldn’t contain it,” Carl said. “He loves to read so much and it’s great to see him get an award for something he loves to do.”

Walt said he was excited to win both awards, and was definitely excited to receive gift cards that he can put toward books.

“I was pretty excited the first time dad told me,” Walt said.

Walt has a love of the library, and one of his favorite people, library director Becky Nichols, is part of the reason that he loves it so much.

“Walt has been an inspiration to me,” Nichols said. I have loved helping him choose books. He has helped us chose books that others might like also.”

Although neither parent said they can take credit for Walt’s love of reading, Julie said that she does have a nightly routine of reading to Walt and his brother, Whitt.

“Every night we get in the bed and we read to them, it’s our bedtime routine,” Julie said.

Julie said she was almost brought to tears when she learned how well Walt had done with reading this year.

“We were really excited,” Julie said. “I was to tears pretty much.”

Carl said he and Julie are just proud of Walt, and are excited to see where his reading will take him.

“I don’t think he set out to try to win anything, I think he just really enjoys reading,” Carl said.

“We’re just super excited to see how much he enjoys reading, and what a huge benefit that is going to be in life for him as he moves forward.”