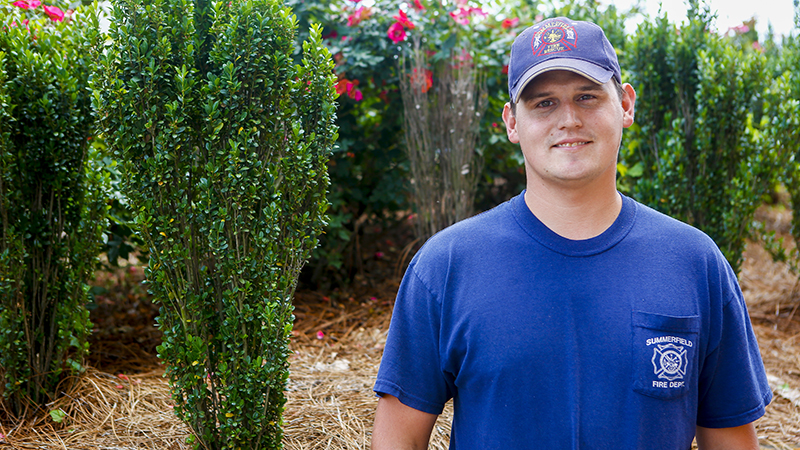 Russell Pardue grew up knowing that he wanted to be a fireman one day.

But it wasn’t until 2014 that he decided to go for it and become a volunteer firefighter.

Pardue is now the assistant fire chief at the Summerfield Volunteer Fire Department.

“I have family in the fire service, and it’s something I’ve always wanted to do and I’ve looked up to them,” Pardue said.

“I always thought about it, and I didn’t know how to pursue it, so finally I said I’m going to find me a volunteer fire department to go in to and I did.”

When he was about 5 years old, his cousin took him to a fire station and he became hooked on the idea of being a fireman.

“Chris [Horton], before he became a career fireman, he took me to Marion Junction Fire Department one time and put me in a truck and showed me all the lights and sirens and gave me a helmet and I was stoked about it,” Pardue said.

Pardue is married to Lizzy and they have two children, Grant, 5 and Ellis, 3.

Pardue said the greatest feeling is knowing his family supports him and that his two sons want to follow in his footsteps.

Pardue said that sometimes the job is tough, but he knows it’s always worth it.

“I’ll leave my family at the dinner table to go save somebody. As hard as it is missing out on stuff like that, it’s just something that God called me to do and something I love doing,” he said.

“For me to be able to save a picture from somebody’s home or some clothes or to pull somebody out of a car, and just to know where would they have been if a volunteer wouldn’t have been there, it’s very gratifying to me [to be there and help].”

Pardue said sometimes he misses out on family events when he gets called to the station, but it’s all worth it in the end.

“If [my family] was in that position and I wasn’t there to help them, I would hope that somebody would leave a birthday party to come help my family,” Pardue said.

“If my family was in need I hope someone would come rushing through that door to help them.”