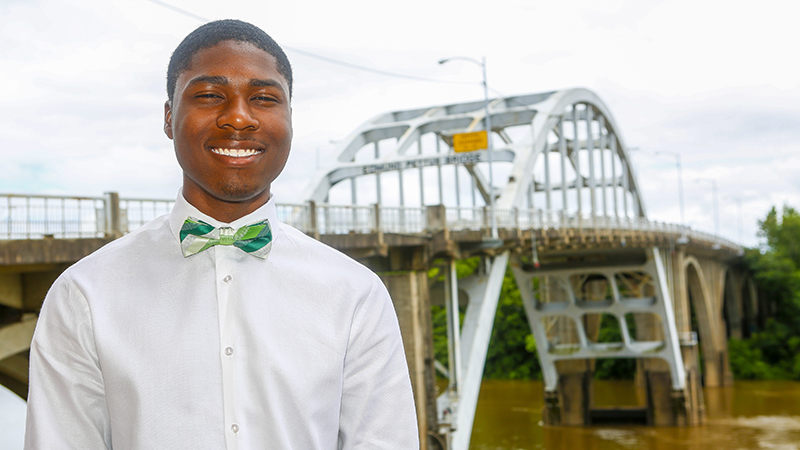 For many freshmen entering high school, they have a goal of wanting to be valedictorian.

But for Lyndon McGee, he knew at the early age of 8 that he wanted to be at the top of his class.

“That was always one of the end goals, to be valedictorian of high school,” McGee said. “It was a lot of taking extra classes and honors classes and a lot of working at home.”

McGee graduated from Dallas County High School on Tuesday night as the valedictorian with a 4.321 GPA.

He plans to attend the University of Alabama and major in computer science with the hopes of one day working at Apple or Google in software engineering.

McGee was involved in the student council, National Honor Society and Beta Club during his time at Dallas County and was awarded several scholarships to be applied toward his education at Alabama.

McGee said the whole time he had been at Dallas County he has been the first in his class, but that didn’t change his excitement when he knew for sure he finished at the top.

“It was very exciting, but everybody else kind of already knew,” he said laughing.

McGee thought at one time that he would want to be a doctor, but as he got older, he leaned more toward working in the computer field.

“I really like computers. I built my own,” McGee said. “I really started getting into computers about two or three years ago, and then I got the idea to build my own because I saw people doing it and I knew I could do that too.”

He worked at a doctor’s office for two summers, and he said he used that money to buy the equipment and parts he needed to build his computer.

“I came home after school after I got my last part … it was 4 p.m., I got it off the porch and I started building and I didn’t stop building until about midnight,” McGee said. “It took me a few months to collect all of the parts, and over those months I spent a lot of time researching and I watched videos over and over again about putting it together. It was fun … but it was also really hard and nerve racking.”

McGee is the son of Lyndon and Evangeliane McGee, who he said has been a big motivating factor in his life.

“It was a lot of hard work and a lot of my mom pushing me,” he said.