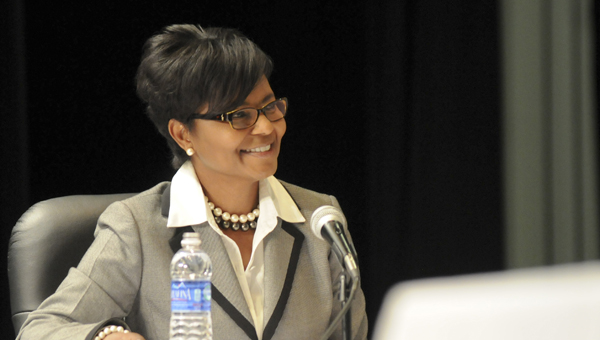 The Selma City School Board voted Tuesday to accept Dr. Angela Mangum’s resignation as superintendent and agreed to a financial settlement.

Mangum was placed on administrative leave exactly two weeks ago for an alleged breach of her contract after the board found out she was a candidate for the Pike Road Schools superintendent position.

“It’s unfortunate any time you lose an employee, but again, it all started with the determination of the breach of contract,” said Johnny Moss, school board president. “We thought that she wanted to move on, so we wanted to go ahead and try to put something in place to provide some other leadership.”

A clause in Mangum’s contract required her to notify the school board or board president if she decided to seek employment outside of the district. The board found out Mangum was a candidate at Pike Road through the media.

Moss said Mangum was given notice of her proposed termination on May 10, the day after she was placed on leave.

During Tuesday’s hearing to discuss Mangum’s termination, Moss revealed the board received a letter of resignation and a proposed settlement agreement from Mangum on Monday. The board then voted to go into executive session for a brief period of time to discuss the letter and agreement.

After returning from executive session, the board voted to accept the letter and agreement. Moss said details of the settlement were not immediately available for release, but they would be at the next school board meeting after the board votes on the minutes of the hearing. Moss did confirm the settlement was financial.

Moss said it worked out better for both parties to accept Mangum’s letter of resignation instead of terminating her.

“It just works out for both parties,” Moss said. “We didn’t want to go through a messy termination hearing, and I think both parties agreed that the amicable split was beneficial to the system and to her.”

Moss said Mangum’s resignation will be effective May 31, but she will be retained for the next two months, as the board moves ahead with hiring the school system’s next leader. Arthur Capers will continue to serve as the interim superintendent.

“Dr. Mangum will be retained for a two-month period as a consultant while we make the transition,” Moss said.

The board will go through Alabama Association of School Boards superintendent search training. Moss said he hopes to find a search committee by the next board meeting.

“As a board we feel that we know what we want, the type of superintendent we want, and hopefully we can translate our vision and mesh both visions,” he said. “We think we’ll find a good superintendent.”

Moss said the board has had communication with the state school board throughout this process.

“We’ve talked briefly. They sent a group down, and we talked about moving forward,” Moss said. “We talked with Dr. Roy Ann Moore, and she is going to come in and assist us as a consultant throughout the summer.”

The board hopes to have the system’s next superintendent in place by the start of the school year.

“We’re excited, and we’re hopeful that we’re going to get somebody in place that shares the same values, goals and vision as the board, the faculty, the staff, the students and the community of Selma,” said board member Danielle Wooten.

Mangum nor an attorney representing her were in attendance for the hearing. Representatives from the Alabama State Board of Education were also not in attendance. The Selma City School System is on the state board’s work session agenda for Wednesday for an update on the system’s intervention status.