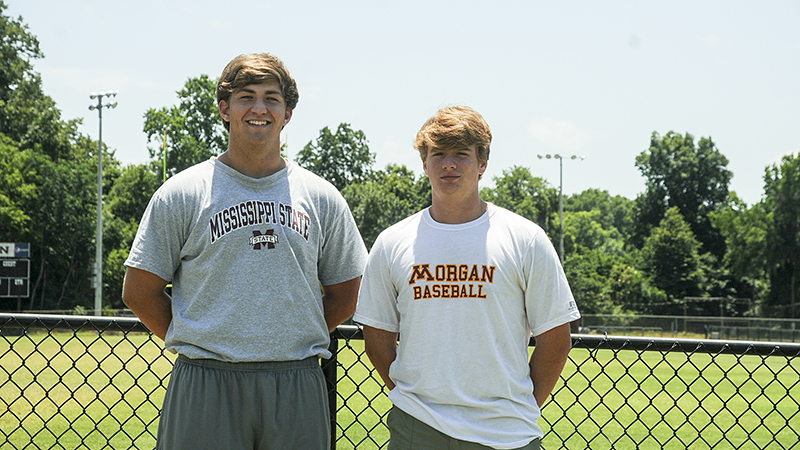 Sawyer Hopkins and Bishop Price will play in the AISA Jr. and Sr. All-Star baseball games next month at Paterson Field in Montgomery.

Two Morgan Academy students will get the opportunity to show off their talents at the AISA baseball All-Star games.

Bishop Price and Sawyer Hopkins were both selected to participate in the 2017 AISA Jr. and Sr. All-Star Baseball game. The game will take place at Paterson Field in Montgomery on June 5. Each team will be made of several high school players from around the state.

“It was one of my personal goals to reach this game,” Morgan academy junior Sawyer Hopkins said. “It is something that I always wanted.”

Hopkins played first base for Morgan Academy last year. He is the son of Jina and Houston Hopkins. He will participate in the junior’s game that will be played at 4 p.m.

“Sawyer is a natural leader.” Morgan Academy baseball coach Josh Thaker said. “He’s calm in the face of the storm and really carried us through the playoff run. He was huge in crucial situations for us.”

Price will also get the opportunity to step into the action during the senior All-Star game. The first pitch is set for 7 p.m.

“Reaching the All star game was one of the things I had planned to accomplish this year,” Price said. “It was right behind my top goal of winning the State Championship.”

Price took up catcher duties during the 2017 season for Morgan Academy. He is the son of Craig and Elizabeth Price.

“Bishop stepped up and played multiple positions, some he probably wasn’t very comfortable with, to allow us more options defensively,” Thacker said. “He has such a fun-loving demeanor and it was infectious to our team.”

The Morgan Academy baseball team ended its season with a loss in the third round of the AISA baseball tournament.

Although they suffered a heartbreaking loss, both players are optimistic about the team that is coming back.

“ I think what we learned from this year season will carry on to the next season, especially with all the youth we have coming back,” Price said.

Each player that was selected the All-Star game was voted on by opposing coaches in their regions. Coaches were not allowed to vote on their own players.