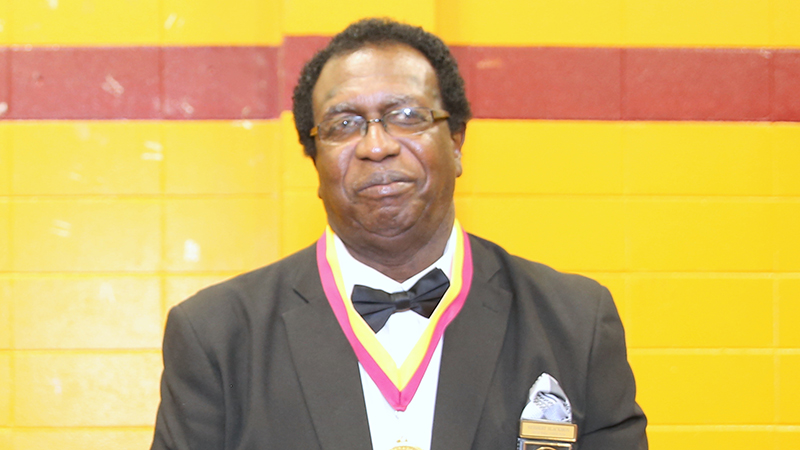 Orville native Herbert Leon Blackmon Sr. was inducted into the J.F. Shields/Mobile County Training School Hall of Fame on May 6, 2017.

Blackmon served as the J.F. Shields head girl’s basketball coach from 1984 to 2012. The induction ceremony was the first ever one performed at J.F. Shields High School. Several family and friends came out to support Herbert Blackmon and his fellow inductees.

“I really appreciate the fact that I was given the opportunity to work at J.F. Shields as their girls’ basketball coach,” Blackmon said. “I always loved working with kids.”

In 1969, Blackmon was drafted to serve in the Vietnam War. He served in the U.S. Army for two years and was promoted to sergeant. He received an honorable discharge in 1971.

“Growing up in Orville taught me how to be patient and not to rush things,” Blackmon said. “Patience was very beneficial during my time in Vietnam; it allowed me to take things one day at a time.”

His drive led him to come back to Alabama after his time in the military and earn a B.A. degree in electricity at Wallace Community College Selma.

Blackmon continued his studies at Alabama State University, where he received three master’s degrees in the areas of physical education, special education and learning disability. He also was part of Alabama State’s baseball team.

He retired from J.F. Shields in 2010 and begun to focus heavily on the Dallas County community. A community he said had given him many tools he uses in everyday life.

“My childhood experiences really taught me to appreciate the little things,” Blackmon said.

Blackmon continues to reside in and be active in the Orville community. He serves as the trustee and director on the Board of Pioneer Electric and as the secretary of the West Dallas Water Board.

Church was a huge part of his life growing up, and he continues to volunteer in that area at Siloam Missionary Baptist Church. He also serves as the Dallas County Convention Superintendent. In this position, Blackmon travels to several churches in the local area to help set up Sunday schools or demonstrate effective ways to perform a Sunday school service.