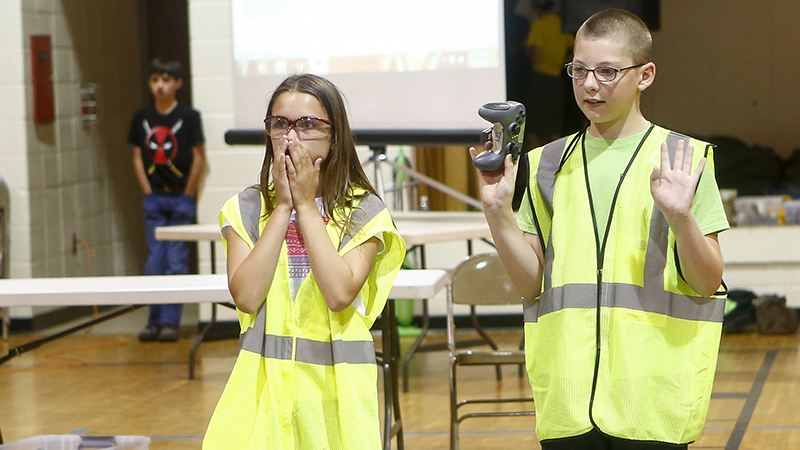 “In the first part of the year, we take part in the Selma’s BEST Robotics at Wallace, then we qualified for Auburn, but in the second half of the year we don’t have as much to do so the kids wanted to try to stick with the robotics part,” said Martin’s robotics teacher Gaylen Denson. “So we wanted to put on a little competition ourselves with our three feeder elementary schools.”

The seventh graders came up with the design, point system and more, and the eighth graders ran the show acting as officials.

“Seeing the elementary students while competing with each other really makes my heart happy,” said Martin eighth grader Abby Wright. “Eventually once they get here, then they’ll want to take on the role that I learned to enjoy.”

Wright served various roles within robotics and was the lead programmer for the robot.

After high school, Wright plans to attend Auburn University and major in aerospace engineering and said robotics in middle school has helped her a lot.

“I enjoy seeing the different things we can create and capabilities of doing them and how we can improve,” Wright said. “I just want to say thank you to Mr. Denson, our robotics teacher, for encouraging me to do my best in everything I do and thank you for pulling me into robotics.”

Asa Lace, a J.E. Terry sixth grader and a driver for their team said he just simply enjoys robotics.

Lace said his favorite part about robotics is driving the robot.

“I looked at it and thought it looked fun and I tried it out,” Lace said.

Denson said having the competition for the elementary students is a great way to introduce them to it, and to continue the science, technology, engineering and mathematics learning.

“Through the problem solving and the math and the science, it all relates back to the STEM fields, so since school is almost out and testing is over, there’s not as much going on in the schools, so this is a way that has kept a lot of excitement toward learning in the four schools,” Denson said.

“It’s a good way for them to go ahead and see what the competition is all about and what it takes for the to be part of it, and it gives us a good opportunity to see the good quality of kids that are coming.”