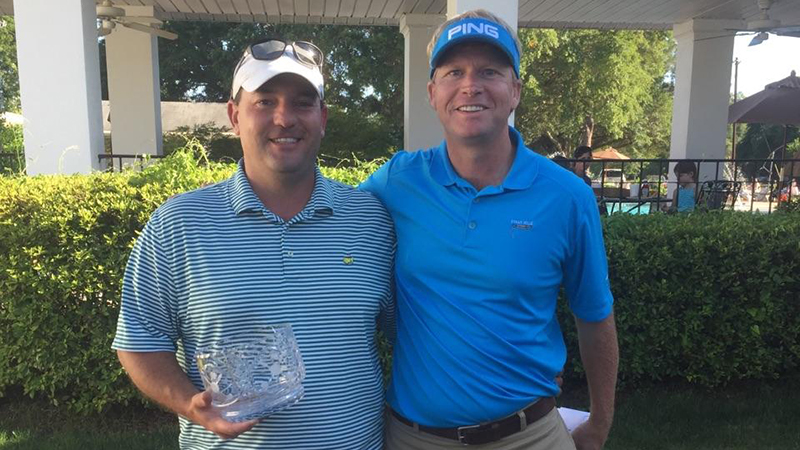 Philip Nader has come close to winning the Selma Country Club Men’s Invitation golf tournament, but this year was different.

He didn’t just come close to winning. He walked away the winner, defeating seven past champions that played in the 54-hole three-day tournament. Nader had an overall score of 211.

“This is my fourth year in a row to be in the final group on Sunday,” he said. “I’ve come real close to winning it so many times, so to finally get it done was a huge relief.”

“Philip is a deserving champion,” said Andy Stewart, who chairs the tournament. “He has played in the tournament for many years and been close in the past. I played with him all three rounds, and he just played really solid golf.”

Playing in the tournament is something Nader looks forward to every year, and now he will join the ranks of a long list of winners.

“When you walk in the locker room and look on the plaque with all the past winners, you just see the blue bloods of Southern golfers that have won that tournament,” he said. “Just to know that you’ll have your name on that plaque with those is pretty awesome.”

Nader led the field Friday and Saturday, but he wasn’t too pleased with the first nine holes on Sunday when he was playing in the final four for the win.

“I didn’t really play great on the front nine. I just kind of hit fairways and greens and made some pars,” he said. “I got to the back nine and still had a four-shot lead at the turn. I bogeyed number 10 and Andy Stewart birdied number 10, so all of sudden I had a two-shot lead.”

With only a few holes left to go, Nader said the pressure was turned up when Garner birdied three out of the last four holes. The win came down to the last hole, where Nader’s tee shot went left and into the trees. He said he was just trying to get the ball in play but ended up putting it right where it needed to be.

“I knew I had hit pretty good shot, but I couldn’t see because the sun was in my eyes,” Nader said. “I wasn’t really sure where the ball ended up, and then all of a sudden I heard all the people on the green start cheering, and I knew then I hit a good shot.”

From there, it was just two putts and a victory.

“Those guys I played with Sunday are as competitive as it gets,” Nader said of his competition. “Paul, Andy and Will too are some of the better players that have ever played in Selma, and just being able to stand up there and compete with them is fun and it makes you a better player playing with those guys.”

Nader said winning the invitational was special to him because of his wife’s family’s connection to it.

“It’s pretty special to me just because of my wife’s family’s relationship with the tournament and the golf course,” he said. “Her grandfather was Bud Burns, her dad was Gary Burns … and her uncle is Tommy Burns, who is the golf pro there now.”

Stewart said the overall turnout was great. There were 56 players in the tournament.

“It’s always fun to put on tournaments because I like to play in them. It’s the main reason, and we have a real rich history with this invitational,” Stewart said. “It’s gone on for 89 years, so we just like to put on a good event each year.”